The bond market is the primary capital-raising marketplace. Market participants issue new debt or buy and sell debt securities in the secondary market. Bonds, notes, and bills are tools for public and private expenditures. Since the US is the world’s leading economy, the market for US government bonds is massive. The long-bond or 30-Year Treasury is a barometer for US interest rates.

While the US central bank, the Federal Reserve, sets short-term interest rates via the Fed Funds rate, buyers and sellers establish rates further out along the yield curve. Following the 2008 global financial crisis and the 2020 worldwide pandemic, the Fed initiated a quantitative easing or QE program. QE is a tool to stimulate the economy via debt purchases that put a cap on rates further out along the yield curve.

Over the past year, the central bank has purchased $120 billion in government debt securities each month. The bond market has been dropping over the past year, despite the Fed purchases. Imagine where the long bond futures would be if the Fed were not buying each month. The bond market is taking on the Fed as it signals inflationary pressures are rising. The Fed may call inflation “transitory,” but this week, the latest consumer price index data from May was a warning sign that the bond market is correct, and the Fed is wrong.

The US 30-Year Treasury bond futures recently rolled from the June to the September contract. 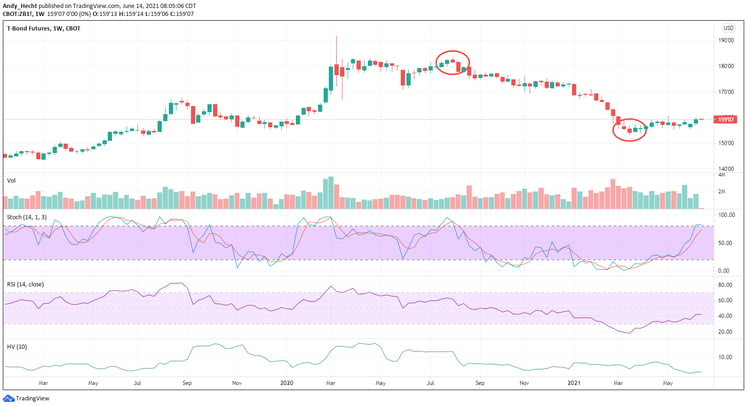 The weekly chart of the long bond futures highlights the drop from 183-06 during the week of August 3, 2020, to the low of 153-29 in late March, early April 2021. While the nearby contract recovered over April, May, and early June, at the 161 level, it remains a lot closer to the low than last August’s peak level.

Bonds seem to have found a floor at just below the 154 level. Weekly price momentum and relative strength indicators have been trending higher since reaching oversold conditions in late March. Open interest, the total number of open long and short positions in the long-bond futures, moved from 1.106 million contracts when the bonds last August to the 1.207 level at the end of last week. Increasing open interest when the price declines is typically a technical validation of a bearish trend in a futures market. Weekly historical volatility at the 4.37% level as of June 11 was close to the lowest level in years.

While the long bond recovered from the lows, last week’s CPI data was bearish for the debt market. The 5% increase and 3.8% rise in core inflation was the highest level in nearly three decades. The Fed continues to call inflationary pressures “transitory” and has concentrated on its “fell employment mandate.” The trend in the bond market, raw material prices, the stock market, real estate, and most other asset classes points to rising inflation.

Employment data could be the transitory outlier as low-wage earners continue to benefit from government stimulus and expanded benefits, which results in higher earnings from staying at home rather than returning to work. The latest CPI data confirms rising inflationary pressures.

Last August, the Fed made a subtle but significant shift

Last August, the US central bank told markets it adjusted its 2% inflation target to an average of 2%. The Fed has been encouraging inflation with low interest rates and quantitative easing. It is unclear what period the Fed is calculating the average rate, which makes a substantial difference. Inflation had been well below the target rate for years before it began to rise in recent months.

Economics is a social science. The models and formulas that the Fed watches and depends on are only as good as the variables, which are the inputs for the decision-making process. Individuals and companies are experiencing dramatic price increases and asset inflation. The Fed is taking a wait-and-see approach as it continues on the current course. The central bank was hoping inflation would rise last August. As the old saying goes, be careful what you wish for, lest it comes true.

The tidal wave of central bank liquidity created by low short-term interest rates is unprecedented. Quantitative easing to the tune of $120 billion per month in debt security purchases is an attempt to keep interest rates further out along the yield curve at low levels to stimulate borrowing and spending and inhibit saving. With the long-bond futures slipping from over 180 to the 161 level at the end of last week, QE may have only softened the inflationary blow over the past months. The Fed has a partner in crime, the US Treasury, and the Washington establishment.

If central bank liquidity is at an all-time high, fiscal stimulus is off the hook. Stimulus in the trillions has only exacerbated rising inflation. The price tag for the monetary and fiscal accommodation since the pandemic began is growing by leaps and bounds as it eats away at money’s purchasing power, the classic definition of inflation.

COVID-19 may be fading into the rearview mirror, but its legacy will remain an inflationary danger for many years to come.

Conflicting signals for the bond market cause a bounce

The Fed will meet this week for its June FOMC meeting. So far, the only thing the central bank has said is that it is “not thinking about thinking about” tapering the QE program or increasing the Fed Funds rate to address rising inflationary pressures.

The unemployment rate at 5.8% and core inflation at the highest level in decades are conflicting data for the central bank. Meanwhile, the administration and Congress keep spending with some politicians demanding even more stimulus and programs.

The bond market found a bottom in late March and has been recovering. 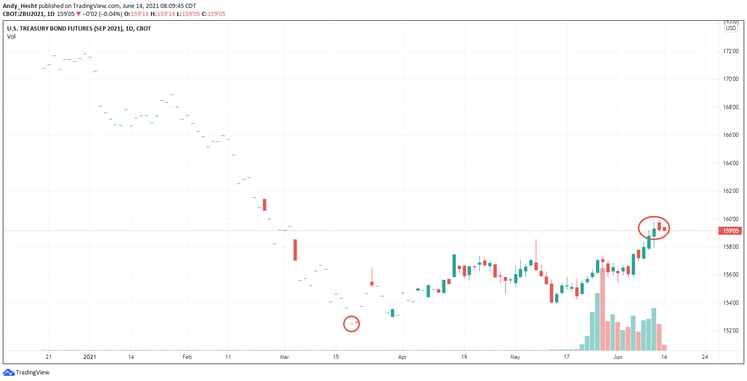 The pattern in the September long-bond futures contract illustrates a series of higher lows and higher highs since it traded at 152-16 on March 18, 2021. The latest high came last week at 159-29. The bond market did not sell off after the latest CPI data, but it did rally on the weak employment numbers.

The bond market may have gotten ahead of itself in March when it fell to the lows. Speculative shorts pushing the long bond futures lower appear to have run out of patience and covered risk positions. However, if the Fed remains on its same accommodative path with help from the government’s tsunami of fiscal stimulus, the rally in bonds is likely to run out of steam sooner rather than later.

Jackson hole could bring another shift

The Fed Governors, economists, and others gather in Jackson Hole, Wyoming, each August. Over the past years, policy shifts have often created fanfare during the event. We could see the Fed begin to guide that QE tapering is on the horizon later this year or early 2022. Economic conditions and rising asset inflation make a shift towards tightening monetary policy logical as vaccines have created herd immunity to the virus, and conditions have not only improved but are robust.

However, if the central bank decides that it needs to keep the accommodative policy in place because of the unemployment rate, it will only pour more fuel on an already burning inflationary fire.

Expect lots of volatility in the bond market over the coming weeks and months. Increased price variance creates a nightmare for passive investors, but it is a paradise for nimble traders with their fingers on the pulse of moving markets. The bond market could be the Garden of Eden for traders over the second half of 2021 and beyond. The bond market is ground zero for the free market’s battle with the Fed and Treasury. Since August 2020, the bond market has been fighting the Fed and winning.