The Federal Reserve along side its arsenal of well qualified Quant's and PHD's continually over estimate their rate hiking abilities. We demonstrated this fact with the FED's own dot plot shown here: 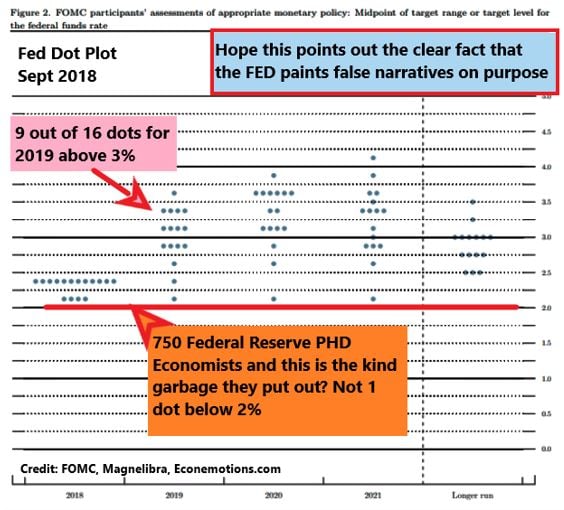 As the chart clearly displays, their prognostication accuracy is abysmal, but what is even worse is the fact that not one outlier exists. How can this be given the chaotic nature of our financial markets, of business cycles, of variables outside of monetary policy control? Yes, we would like to know and our only conclusion is that they do it ON PURPOSE!  Why? Because they want to continually paint a rosier than possible scenario but if it isn't obvious by now or after 4 straight decades, interest rates start each new decade with higher rates then where they end. This decade will be no different as this chart exposes:

Another item we touched upon was the fact that corporate profits have been flat for the better part of 7 years now and even though they are paying some of the lowest effective tax rates in history. If it this also is blatantly obvious, the massive subsidy our government gives to corporations well realize this single point, the effective tax rate for U.S. corporations is roughly 9.9%: 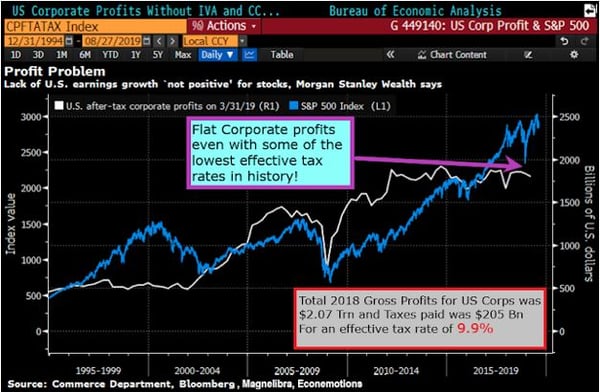 Just imagine how much worse this chart would look in terms of profits if the corporations were forced to pay a flat 30% tax rate! For those non-economic types, just understand that this continued lower tax rate is an absolute necessity given the WACC calculation or Weighted Average Cost of Capital. The lower tax rate, lowers the tax shield that corporations enjoy by deducting debt interest payments so if the corporate tax rate was held high, the WACC would come down due to the tax shield provided, giving an even greater subsidy to issue debt and borrow. Corporations are borrowing at super low yields and even negative yields which is nothing more than a stealth tax on investment and savings. This is a corporate treasurers dream, get paid to issue debt, get paid to buy back stock and don't worry about future profits, we can finance growth!

We touch upon the recent announcement by Philip Morris about a potential merger with Altria. We feel that this exposes PM to some future risk as Altria owns 35% of JUUL and we have seen the first death related to vaping and the e-cigarette phenomenon will continue to attract scrutiny if the CDC and FDA find conclusive evidence that this is indeed the cause. PM was hit on the news losing 5% to $73.45.

On the technical side we looked at the ongoing consolidation in the SP500 futures and that the algorithmic systematic bots are in full control of the range shown here: 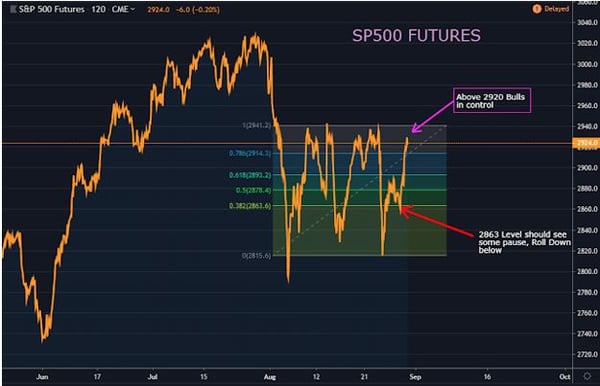 We feel a break out of this box will come above 2940 on the upside and 2812 on the downside, but continued chop most likely until we get the next FOMC decision. Now this doesn't mean we can't get an outlier exogenous shock, most likely coming out of China or Hong Kong with both the ongoing tariffs as well as the protests. If you haven't seen what is going on in Hong Kong, we highly suggest you get up to speed, its shaping up to be a real showdown.

The other chart we noted was Nat Gas, which has been bludgeoned for quite some time, but we feel the 2.25 area is putting in a decent bottom or at least fighting to and a break of the trend line to the upside should give bulls some confidence:

Finally we also looked at the continued inversion of the US 10s2s yield curve. As you can see from the chart below, back in 2006 to 2007 this curve inverted noting well ahead of time the crisis that was about to hit the global economies. We are once again inverted and most likely well ahead of the turbulence to come: 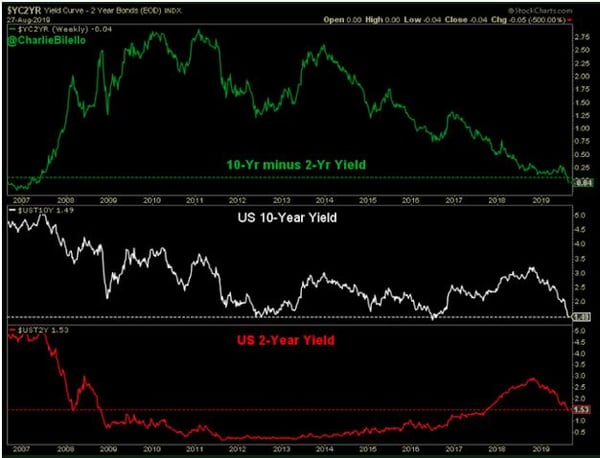 Ok that is it folks, we hope to continue our education and updating you on the things we feel matter the most to our followers and traders. It's not easy putting all this together each week but we love educating and since we are doing our own proprietary research anyway, why not share it with the community! Cheers.