New Crop Beans Probe Below the Teens - Did Lumber Give the Clue?

Last week, the commodities sector experienced more than a speed bump after an extended period of price appreciation. As July soybeans roll to the next active month and the new crop November contract in the futures market, the price became a falling knife before recovering on Friday, June 18. July beans have been in the teens for most of 2021. New crop November beans rose into the teens in April and remained there until mid-June when they briefly fell below $13 per bushel.


While the weather across the critical growing regions is the primary factor driving the price of the oilseed futures, all commodity prices fell last week. Ironically, lumber has been signaling a correction was on the horizon since mid-May. The illiquid lumber market has a habit of leading commodity prices, making it a crucial sentiment benchmark. I never trade lumber because of its limited liquidity, but I watch the price action like a hawk. 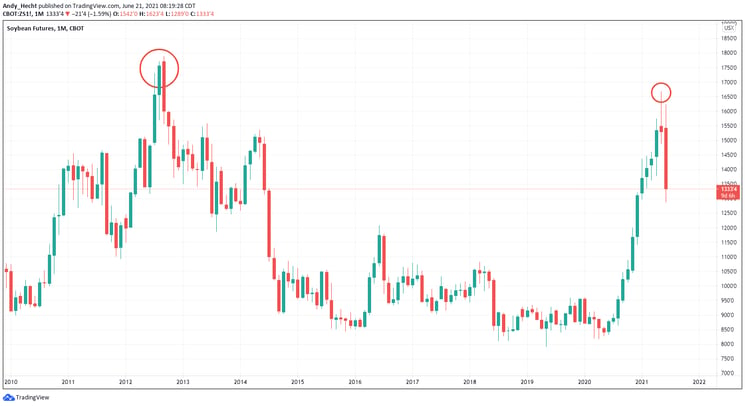 The chart shows the rise to the highest price since September 2012 when soybean futures reached a record $17.8900 peak. Chinese demand, the weather conditions and COVID-19 in South America, and falling global inventories pushed the price to the high last month. Nearby soybean prices have been mainly in the teens throughout 2021, only dipping to a low of $12.98 in January.

The recent selling took the price down to a low of $13.2350 per bushel last week before it covered to around the $14 level. New-crop November soybeans have been trading in backwardation to the nearby July contract. Backwardation is a condition where nearby prices are higher than deferred prices. Backwardation is a sign of tight supplies or a market deficit.

The market has remained optimistic that the 2021 crop year will produce enough oilseeds to meet the growing global demand. 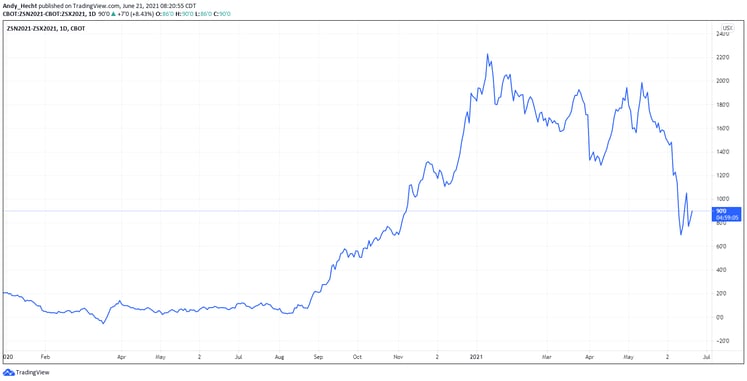 The chart of soybeans for delivery in July 2021 minus November 2021 shows the backwardation narrowed from a high of $2.29 per bushel in January to the 82.25 cents level at the end of last week. However, at 82.25 cents, the July beans continue to command a hefty premium to the new crop November beans. 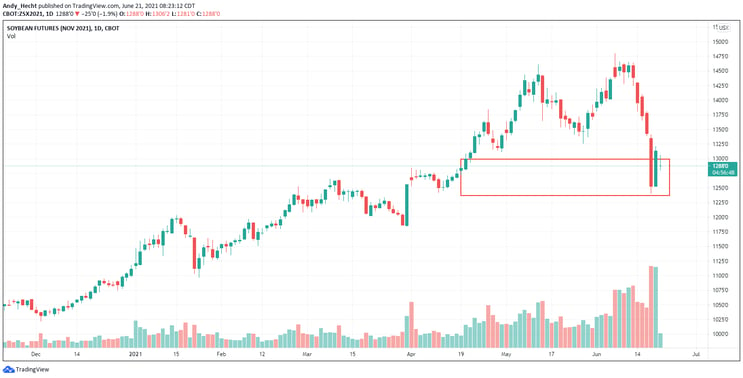 The chart shows that the November futures contract entered the teens, with the price rising above $13 per bushel in late April and remained there until last week when it probed under the level. However, the November contract recovered, and new crop beans were still in the teens as of June 18. At $13.15, soybeans for November delivery corrected by over 11% from the June 7 high at $14.80 per bushel.

They were not the only commodities

Soybeans were not the only commodities to experience selling over the past weeks. Corn and wheat prices decline. Copper, a leading metal, fell from a record high at nearly $4.90 per pound in May to settle below $4.16 last week, a 15% decline. Palladium reached an all-time high of $3019 per ounce in May and was trading around the $2470 level on June 18, over 18% lower. Metals, industrial, and agricultural commodities fell sharply last week.
The only markets that remained near the recent highs were crude oil and natural gas. The strength in the energy sector is likely a function of the shift in US energy policy, causing tighter regulations on drilling and fracking at a time when demand is booming in the wake of the global pandemic.

A Fed hint made its transitory wish come true

The selloff in commodities began before the June 10 Fed meeting but selling accelerated in its aftermath. The Fed did not change monetary policy. The only concrete change was a slight five basis point increase in the reverse repo rate. However, the central bank shifted its rhetoric from “not thinking about thinking about” rate hikes or tapering QE. The FOMC members decided it was an excellent time to begin thinking. The May CPI data that shows inflation rising by 5% and the 3.8% rise in core inflation, excluding food and energy, was enough for the central bank to hint that rates could head higher and QE could begin to taper in 2022. The prospects of a less accommodative Fed caused a cascade of selling in markets across all asset classes.

On Friday, June 18, hawkish comments by Fed Governor James Bullard caused selling in the stock market. While the Fed continues to characterize rising inflationary pressures as “transitory,” the more hawkish comments and forecasts may have made its characterization comes true, at least in the short term. The correction in commodity prices will likely cause a decline in inflation data over the coming months if prices continue to fall or sit around the current levels.

Lumber continues to give clues as it moves first

The illiquid lumber futures market provides the commodity market with clues over the past months on the up and the downside. Before 2018, the lumber price never traded above $493.50 per 1,000 board feet, the 1993 high. 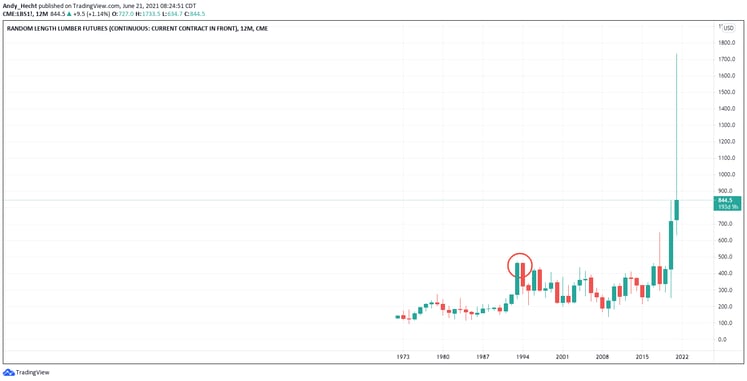 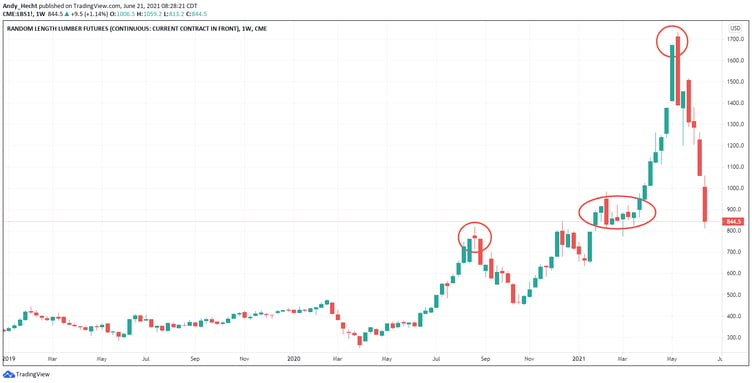 Lumber may be an illiquid market that does not offer trading or investment opportunities, but it has been an impressive barometer for the future path of least resistance for raw material prices. I never trade lumber, but I watch the price action in the wood market like a hawk.

Last week, nearby lumber futures fell to a low of $855.10 per 1,000 board feet and settled below the $900 level on June 18. Lumber has nearly halved in price from the early May high, just six short weeks ago. Put lumber on your radar as a critical indicator of commodity market sentiment. Over the past year, lumber rallies have been a harbinger of bullish trends in the raw materials asset class. Falling lumber prices have signaled that corrections are on the horizon.

Meanwhile, the correction in commodities was brutal last week, but the asset class remains in a bullish trend since the March and April 2020 lows. Even the most aggressive bull markets rarely move in straight lines. The higher prices move, the odds of brutal corrective periods rise. The cure for high prices in commodities is those high prices as producers increase output, and demand tends to decline when raw materials become too expensive for consumers.

We are still in the early days of the post-pandemic era. The tidal wave of central bank liquidity and tsunami of government stimulus continue to overwhelm the financial system. The CPI data told us that inflation is a clear and present danger. Whether it is “transitory” is a question that remains. Real estate prices are soaring; the stock market remains near its all-time high. Digital currency prices suffered severe corrections, but they remain far higher than 2020 levels. The US dollar may be bouncing against other world currencies, but that could be a mirage. Measuring the dollar’s value against other foreign exchange instruments provides an incomplete picture. If all fiat currencies are losing purchasing power, the dollar may only be the healthiest horse in the foreign exchange glue factory.

Inflationary pressures will not go away overnight. Even if the Fed begins increasing the short-term Fed Funds rate and tapers QE, the liquidity in the financial system remains at unprecedented levels. Government spending is not likely to decline under the current administration in Washington, DC.

The impact of liquidity and stimulus in 2008 drove commodity prices higher until 2011-2012. The levels in 2020 and 2021 are far higher than in 2008. As I recently wrote, Albert Einstein defined insanity as doing the same thing repeatedly and expecting a different result. Professor Einstein would likely be a buyer of commodities on the current price dip as we are still in the early days of the bullish cycle if the period from 2008-2012 is a model.

As vaccines create herd immunity to COVID-19, the virus will continue to fade into the market’s rearview mirror. However, the legacy will live on for years. I will be watching lumber for clues. When the wood price hits bottom and turns, it could provide another hint that commodity prices will reach higher lows sooner rather than later.

When it comes to the soybean and other agricultural markets, rising inflation is bullish, but Mother Nature will dictate the path of least resistance for prices. The 2021 crop will be a function of the weather conditions across the fertile plains in the US and other growing regions in the northern hemisphere over the coming weeks. Commodities remain in bull markets, despite the recent selloff on the back of the Fed’s rhetoric. Any significant shift in monetary policy remains months away. A rising dollar and higher interest rates could cause lots of turmoil in markets across all asset classes, but the damage from the liquidity and stimulus that stabilized the economy and financial system will last for years to come. I remain a commodity bull, despite the recent selloffs and view them as buying opportunities.
Picking bottoms in markets is a fool’s game, so we trade with the trends. However, the odds and fundamentals favor higher lows in the inflation-sensitive asset class.