Bull and bear markets can rise or fall to levels that even the most respected analysts believe are illogical, unreasonable, and irrational. On April 20, 2020, we witnessed an irrational day where the price of NYMEX crude oil not only dropped below zero for the first time but also fell to a low of negative $40.32 per barrel.

NYMEX WTI is landlocked petroleum. The delivery point is at a pipeline in Cushing, Oklahoma. With no storage options, those holding long positions had to sell at any price as the futures contract’s expiration approached. Crude oil became a bearish hot potato as energy demand evaporated during the pandemic. The price fell to a level that few thought possible.

In May 2021, the crude oil futures arena on NYMEX has recovered and was over $100 per barrel, higher than the April 2020 low. Moreover, the path of least resistance remains higher, and we could be on the verge of a move to irrational, illogical, and unreasonable levels on the upside.

The price has been trending higher since last April

On April 20, 2020, nearby NYMEX crude oil futures reached the lowest price since trading began in the 1980s. 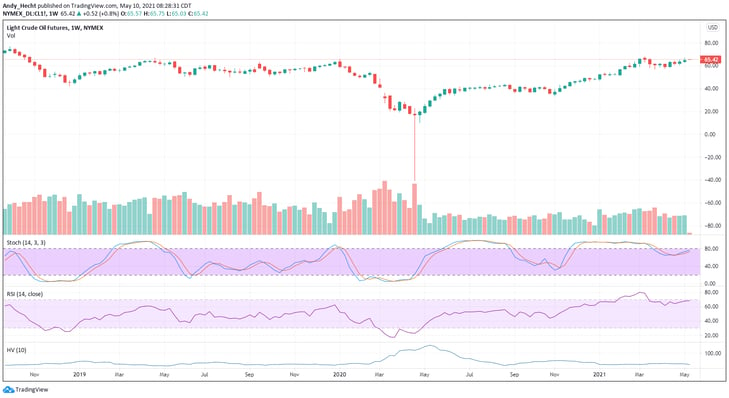 The weekly chart highlights the over $100 per barrel ascent of the continuous futures contract from negative $40.32 per barrel to a settlement at $64.90 per barrel on May 7, 2021. NYMEX crude oil has made higher lows and higher highs over the past year, reaching $67.98 per barrel in. early March. After a correction to $57.25 in late March, the price resumed its upward trend. Open interest, the total number of open long and short positions in the crude oil futures market, has been rising with the price over the past weeks, moving from 2.31 million contracts in late March to 2.45 million at the end of last week. Increasing open interest when the price is rising is typically a technical validation of a bullish trend in futures markets.

Meanwhile, weekly price momentum and relative strength indicators sit above neutral readings but are nowhere near overbought conditions, leaving room for more gains. Weekly historical volatility below the 30% level reflects that oil prices are back on the staircase to the upside. The energy commodity trends to take the stairs higher and an escalator or elevator lower during corrections or bear markets, as we witnessed in March and April 2020 when it took an elevator shaft to the downside.

Crude oil has not traded in the triple digits since 2014

The last time NYMEX crude oil futures traded over the $100 per barrel level was June 2014.

As the monthly chart highlights, crude oil has remained below the triple-digit price over the past seven years. The all-time high in MYNEX futures came in 2008, before the global financial crisis when the energy commodity hit a peak at $147.27 per barrel.

Three reasons lead us to believe that crude oil could be heading back to a triple-digit price sooner rather than later. Goldman Sachs recently forecast the price could reach the $80 level later this year. Market price action often causes prices to fall far further than analysts believe possible during bear markets, as we learned on April 20, 2020. The same holds for bull markets, where a herd of buying can take prices to levels that seem illogical, unreasonable, and irrational for periods. If you doubt that, look at the price action in digital currencies over the past months. A $100 handle on NYMEX crude oil is not so far-fetched in the current environment.

Reason one- OPEC+ has the pricing baton

The 2020 US election cycle transferred the oil market’s pricing power from the United States to OPEC+. The shift from years of “drill-baby-drill” and “frack-baby-frack” under the Trump administration to a greener path that includes stricter regulations under President Biden means US output will decline. After suffering under rising US shale production for years, the international oil cartel and Russians can now squeeze the US and other worldwide consumers to pay higher prices.

Do not underestimate OPEC+ when it comes to extracting the highest possible price for petroleum as it is the cartel’s stated mission on its website. The terms “steady income” and “fair return” leave no doubt that pushing the price to the highest possible level is the goal. As OPEC+ now controls the marginal barrels that influence the path of least resistance for prices, production policy will aim to fill their coffers with petroleum revenue. Balancing the Saudi budget requires an $80 per barrel price. Russian President Vladimir Putin is not allergic to income and would like to see the flow from the US at the highest possible price after his experience with shale production.

Ironically, OPEC+’s power is rising when the oil market could enter an almost perfect bullish storm. Vaccines creating herd immunity to COVID-19 are creating robust and even explosive energy demand. After over a year of social distancing, working from home, or unemployment, people are traveling and returning to work, venturing out, and booking travel. Businesses are operating, causing a substantial demand surge for crude oil.

Moreover, the monetary and fiscal policy tools that address the pandemic’s economic fallout are creating inflation. In August 2020, the US Federal Reserve shifted its inflation target from 2% to an average of 2%. The tidal wave of central bank liquidity and historically low interest rates, together with a tsunami of government stimulus, is eroding fiat currency purchasing power. Prices of all commodities are surging. Oil may have already seen an over $100 per barrel rise from the April 20 high, but other markets tell us that we have not seen the highs.

Reason three- The trend is your friend

The trend in commodity prices is decidedly higher. One would have to be blind not to see the price action unless, of course, they are sitting at the Fed or US Treasury where the economists continue to use their new favorite term “transitory.”

Grains prices are at the highest levels since 2012-2013. Lumber reached a new record high at over $1700 per 1,000 board feet last week. Palladium rose to a new all-time peak at $3019 per ounce on May 4. Sugar prices are at multi-year highs, as are coffee prices. Ethanol, a product of corn in the US and sugarcane in Brazil, is at the highest price since 2014, the last time crude oil hit the $100 mark.

The Canadian and Australian dollars are rising in value against the US dollar. The C$ and A$ are commodity proxies as the countries are substantial raw material exporters, and rising prices increase their corporate earnings and tax revenues. Even the forlorn Brazilian real has been trending higher over the past weeks. When Brazil is a political and economic mess, the largest economy and most populous South American nation is a substantial commodity producer.

The evidence is right in front of our faces; inflation is not on the horizon; it has arrived. The central banks and governments continue to pour fuel on the burning inflationary pressure. The slight uptick in the US unemployment rate to 6.1% last week takes the pressure off the Fed to even “think about thinking about” any QE tapering or hikes in short-term interest rates despite 6.4% GDP growth in Q1, which is likely to continue in Q2. Is a $100 handle on crude oil so far-fetched in the current environment? I think not.