August Could Be The Start Of A Bumpy Period In Markets

Last week, in an interview on CNBC, legendary trader and investor Stanley Druckenmiller sounded an alarm. He told reporters on the financial news network, “I can’t find any period in history where monetary and fiscal policy were this out of step with the economic circumstances, not one…I will be surprised if we’re not out of the stock market by the end of the year, just because these bubbles can’t last that long.” He went on to say there is a “raging mania in all assets.”

In 2021, cryptocurrencies rose in a parabolic move to record highs. Even though they corrected, prices remain far above last year’s levels. The explosive rallies reflect the decline in the faith in government and central bank control of the money supply.

The tidal wave of central bank stimulus and tsunami of government stimulus has weighed on fiat currency’s purchasing power. The stock market has risen to all-time highs because, for many investors, TINA, there is no alternative to stocks. As Leon Cooperman, the ex-Goldman Sachs partner and hedge fund manager, once said, “Buying bonds amounts to picking up pennies in front of a steamroller.” Commodity prices are trending higher in a bullish relay race that began at the March and April 2020 lows. Gold reached a record peak in August 2020. Grain and oilseed prices rose to eight-year highs earlier this year. In May, lumber, copper, and palladium reached record peaks. NYMEX crude oil futures recently rose to the highest level since 2014. Natural gas traded to highs above $4 for the first time since the peak winter season in late 2018. The last time natural gas was north of $4 per MMBtu was in 2014. Ethanol moved to its highest price since 2014, and coal to a level not seen since 2008. Last week, coffee futures traded at over the $2.15 level for the first time since 2014 before correcting. Commodities, stocks, cryptocurrencies, and other asset prices are trending higher. Residential real estate is not only a seller’s market, but prices have moved to insane levels in some regions. The bottom line is accommodative monetary and fiscal policies have planted turbocharged inflationary seeds, and markets have responded.

Stanley Druckenmiller knows it is not a question of if significant volatility grips markets across all asset classes, but when it occurs. August 2021 could be a very bumpy period in markets as the traditionally volatile fall season is on the horizon.

Jackson Hole could send ripples across markets like in 2020

The markets are anxiously awaiting word from the US central bank at its annual August gathering in Jackson Hole, Wyoming. Aside from fishing, hiking, and other outdoor activities, the Fed tends to use the offsite experience as an occasion to roll out monetary policy changes. Even though the 2020 summer meeting was virtual, the Fed took the opportunity to introduce a not-so-subtle change in inflation targets, shifting them from 2% to an average of 2%.

After the highly inflationary CPI data over the past three months and a slew of other validations that the economic condition is far above the “target,” the Fed’s tone changed. At the recent meetings, the rhetoric became subtly more hawkish than dovish. However, this week, the central bank took a dovish step back as COVID-19’s delta variant is causing infections to rise. The variant could be a convenient reason for the Fed to maintain the accommodative status quo.

The market expects the beginning of tightening

The subtle change in the rhetoric increased market expectations that tighter credit is on the horizon. However, the market does not always get what it expects, and the Fed and US Treasury are notorious doves since 2008.

The delta variant provides another excuse

If the central bank digs deep into the excuse box, which sits next to the toolbox full of accommodative tools, it may come up with the rising number of COVID-19 delta variant cases as justification for the status quo. The powers in Washington DC will not mind as Democrats desperately want to hold onto and even expand the majority in the House of Representatives and the Senate. Liquidity and stimulus continue to prop up the economy, but the flood of the pair comes with a steep price tag.

If the Fed decides to delay tapering QE or set a schedule to increase the Fed Funds rate from zero percent, it will only push off the inevitable. The bottom line is that artificially low interest rates and $120 billion each month in debt purchases are transitory policies to stabilize economic conditions.

What does “transitory” really mean?

The Fed’s mantra in 2021 is “transitory” when describing rising inflationary pressures. After the May CPI data, all the focus turned to lumber prices and skyrocketing home prices. In the wake of the June CPI, bottlenecks in the supply chain causing a semiconductor shortage and lack of supplies of new and used cars were thrust to the center of the excuse stage.
Meanwhile, markets have been in an inflationary relay race to the top, with one asset passing the baton to the next. The stock market remains near record highs.

Cryptocurrencies exploded, reaching incredible peaks in April and May, which is a direct challenge to the central bank and government control of the money supply. Commodity prices have been a merry-go-round of increasing prices. Real estate levels are out of this world. My wife and I bought a new home in late 2016. This week, smaller houses on our block were selling at over 100% above the price we paid.

“Transitory” means temporary, and that a condition will pass. The Fed refused to define its measurement period for the “average 2% inflation rate,” calling it “discretionary.” Uncertainty is growing, and markets appear ready to respond.

The price of any asset is always the correct price because it is the level where buyers and sellers meet in a transparent marketplace. The Fed may control short-term interest rates via the Fed Funds rate, but long-term interest rates reflect the market’s perception of credit. Ironically, the bond market has been taking on the Fed since August 2020. 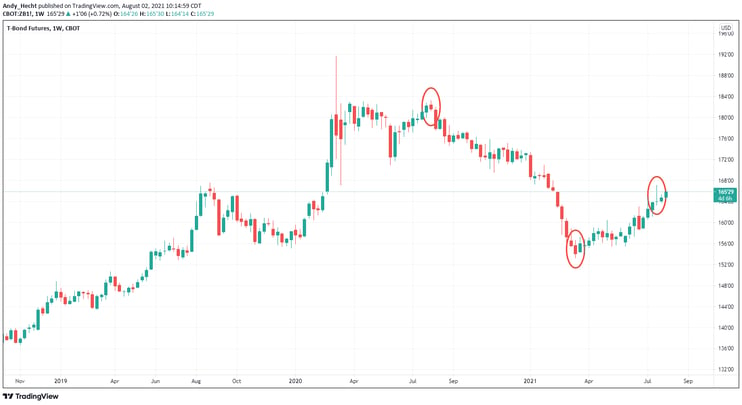 In a series of counter-intuitive moves, the US 30-Year Treasury bond futures fell from 183-06 in August 2020 to a low of 153-29 during the final week of March while the Fed purchased an average of $120 billion each month in debt securities. As inflation data began to make the Fed think about tightening over the past few months, the bonds have risen, reaching the most recent high at 167-04 in mid-July. The bond market has been moving contrary to the central bank’s signals with the futures near the highs at just below the 165 level as of July 30.

Meanwhile, the dollar index reflects the US currency’s value against other world reserve foreign exchange instruments. Since the euro is the second-leading reserve currency, the dollar index has a 57.6% exposure to the European currency. The dollar index tends to move higher and lower with interest rate differentials. In the wake of last year’s pandemic, the rate gap between the dollar and the euro narrowed substantially. 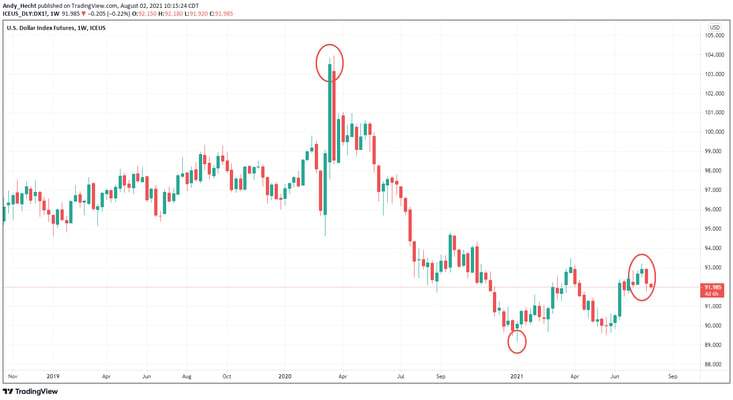 As the weekly chart illustrates, the dollar index fell from its highest level since 2002 at 103.96 in March 2020 to a low of 89.165 in early 2021, a drop of 14.2%, a substantial move for the US dollar. Since May, the index rallied, reaching the 93.195 level in July. The dollar index was at just over the 92 level on July 30. The index fell after the July FOMC meeting when the central bank appeared more dovish than the prior month.

The high in March 2020 was a flight to quality during the worst period of asset liquidation caused by the pandemic. The decline came as US rates fell. The latest rally is on the back of the prospects for rising US rates compared to European rates and the potential for volatile markets over the coming weeks and months. The dollar and bond market are likely to reflect volatility better than the VIX index. The VIX reflects implied volatility of put and call options on S&P 500 stocks. Since market participants tend to panic during downside corrections, the VIX rallies when stocks fall. However, the stock market’s rise could be a symptom of inflationary pressures where all asset prices are rising, and that could continue given the tidal wave of central bank liquidity and tsunami of government stimulus.

Even if the Fed bites the bullet and tightens credit, the process will be laborious. The central bank does nothing quickly unless it faces an unprecedented event, as we witnessed in 2008 with the financial crisis and 2020 on the back of the pandemic. Going from hawkish to dovish is a short-term affair while reversing course to a tighter approach to credit is done at a snail’s pace, in the interest of “market stability.” Meanwhile, with the 2022 midterm elections on the horizon and a green and progressive agenda in Washington DC, the spending will continue. Government stimulus in the trillions overwhelms any tweaks the Fed may make over the coming months.

The price tag for inflationary policies is massive. The market is waiting for the Fed to unwrap its plans at the August Jackson Hole event. The FOMC got a lot more inflation than it bargained for when it boosted its target to an unknown and unmeasurable “discretionary” level last year. Fasten your seatbelts; markets are in for a wild ride over the coming weeks and months. The fall tends to be a volatile time in the stock market. Corrections in 1929, 1987, and 2008 came during the fourth quarter. Follow those trends as they are your only friend. The central bank and government policies may have been friendly for markets since the early 2020 lows but feeding the inflation beast with liquidity and stimulus is like giving bigger fixes to a junkie. According to Stan Druckenmiller, a rude awakening could be on the horizon. I can’t disagree, as all the seeds of financial insanity have begun to bloom. Either raging inflation or raging stagflation would roil the markets, and one of the two conditions seems unavoidable.

We could look back at August 2021 as the beginning of an unprecedented and volatile period in markets. Fasten those seatbelts, hedge your bets and investments, and prepare for a head-spinning ride. It is far better to be safe and ready than unprepared and sorry when it comes to your assets.