China Prepares To Roll Out The Digital Yuan: The Evolution Of The Global Financial Revolution

Which came first, the chicken or the egg? The question has its root in ancient Greece, where philosophers used it as an analogy to opine on cause and effect. Aristotle, writing in the fourth century BCE, addressed the question of origin versus first cause as an infinite sequence, with no actual source. The paradox may be one of the most studied and debated topics in history.

In the young world of cryptocurrencies, a modern-day chicken and egg question may only lie in the brain of Satoshi Nakamoto. The anonymous founder, who may exist in name only, is the only one who can answer which came first, Bitcoin or blockchain?

Bitcoin and the expanding cryptocurrency asset class that includes over 11,000 tokens as of the end of last week continues to provoke controversy. However, there is almost universal acceptance that blockchain technology is evolutionary for finance and other applications.
The growth of the asset class over the past decade has been nothing short of astonishing. However, at the $1.395 trillion level on July 25, the combined market cap remains well under Apple’s (AAPL). The world’s most valuable company had a value of over $2.479 trillion at $148.56 per share on July 23. While the cryptocurrency asset class market cap is nothing to sneeze at, it still pales compared to the stock market and many other asset classes.

Through Newtons’ First Law, physics teaches that a body in motion tends to remain in motion. The trends in cryptocurrencies remain higher despite the recent correction that cut many of the tokens’ values in half. Currencies that employ blockchain technology will continue to come to market over the coming days, weeks, months, and years. The next significant issuance will come not from the private sector but from China, the world’s second-leading economy that is nipping at the heels of the US, the world’s largest economy.

China’s digital yuan will be the first

It is not a question of if a country issues a digital version of its currency, but when it will occur. China is leading the race as it has been working on the digital yuan or 3-CNY since 2014, long before Bitcoin and the other cryptos really took off on the upside.
In mid-July, the Chinese government published a white paper in Chinese and English outlining that “Foreign residents temporarily traveling ion China can open an e-CNY wallet to meet daily payment needs without opening a domestic bank account.”

With the fanfare of the 2022 Winter Olympics in Beijing on the horizon, China is targeting the event as an opportunity to roll out the e-CNY product for visitors as the next step for its digital currency. A group of US Senators urged the Olympic Committee to forbid US athletes from using the digital yuan because of surveillance issues. China responded that “The US politicians should abide by the spirit in the Olympic Charter, stop making sports a political matter and stop making troubles out of the digital currency in China.”

As of the end of June, after a year of e-CNY tests across China, approximately 20.87 million personal wallets and over 3.5 million corporate wallets were opened. Transactions values are about 34.5 billion yuan or $5.4 billion, according to the paper.

China is well on the way to making its digital currency the mainstream means of exchange. The trials have expanded with programs producing a digital yuan insurance product for medical personnel exposed to coronavirus risks in Shenzhen, Guangdong Province.
China’s political and economic system may be better positioned to roll out digital currencies as an authoritarian approach allows the government to control the money supply and all aspects of life directly. In the US, the politicians may blame “surveillance” issues for objections to athletes using the e-CNY during the Olympics. Still, they are likely far more concerned with controlling the purse strings, which is crucial for maintaining power.

Moreover, China’s political system allows the government to squash any competition to its digital currency. Simultaneously, blockchain technology will enable the Chinese government to track spending in real-time, increasing its power over 1.4 billion citizens. Cryptocurrencies became popular in China as they allow citizens to anonymously move funds offshore, which China defines as a nefarious use. Blockchains’ efficiency is a dream come true for the CCP.

As China prepares to roll out the digital yuan fully, the central bank has been cracking down on cryptocurrency mining and trading. In May, the government banned Chinese financial institutions and payment companies from providing crypto-related series. Mass arrests following in June. People suspected of using cryptos in “nefarious” ways were rounded up. In July, the Beijing office of the People’s Bank of China shut down a company “suspected of providing software services for virtual currency transactions.”

Bitcoin, the leading cryptocurrency, reached a high of over $65,500 per token on April 14, the day of the Coinbase (COIN) listing on NASDAQ. The actions in China were a primary cause of the end of Bitcoin’s parabolic rally. 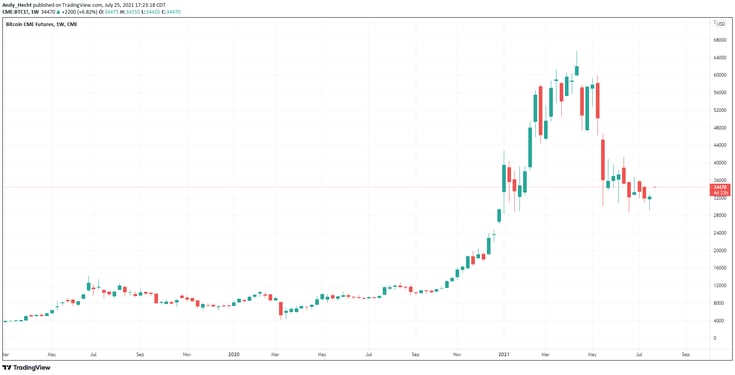 As the chart highlights, nearby Bitcoin futures fell from $65,520 in mid-April to a low of $28,800 in late June. At the most recent $32,480 level, the cryptocurrency remains a lot closer to the low than the high. The crypto asset class’s market cap dropped from over $2.4 to under $1.4 trillion over the period. China’s crackdown on cryptocurrencies has been the leading reason for the decline.

The Chinese political system allows its leaders to squash competition from other cryptocurrencies as it rolls out its new digital yuan. While the US, Europe, and other countries will roll out digital dollars, euros, and other e-currencies based on blockchain technology over the coming years, they will not have the same latitude to crush competition from cryptocurrencies. We are likely to see a flurry of regulatory moves in anticipation of western digital currencies, but it will be a slow process. China can act immediately, while differing political factions in the US and Europe will spend months, if not years, debating the regulatory framework.

I believe we will see a schism in the blockchain currency world that will separate cryptocurrencies from government-issued digital currencies and stable coins. A stable coin is a hybrid as it pegs its price to another crypto, fiat money, or exchange-traded commodities.

China would like to see cryptos disappear, which is the likely sentiment for all governments as power comes from controlling money. I believe the global regulatory framework will eventually favor digital government-issued currencies and stable coins over pure cryptocurrencies.

The ideological divide is vast. Cryptocurrency’s philosophical backbone is libertarian as they represent a rejection of the central bank and government’s control of money. As the asset class grows, the gap will widen. Chinese actions against cryptos could be the tip of the iceberg. While China and the US governments agree on little, they could be comrades-in-arms in a war against the cryptocurrency philosophy.

Carbon, security, custody, and control are the issues facing cryptos

Four of the problems facing cryptocurrencies have different ramifications for the asset class’s future.

A digital dollar and euro are on the horizon, but the government needs to “get it right.”

When questioned about the futures of a digital dollar, Fed Chairman Jerome Powell hit the nail on the head with his answer. The leader of the central bank is a master of deflection and unanswered questions. When asked about the period the Fed looks to for its “average of a 2% inflation rate,” his answer was it is “discretionary.” However, when it comes to a digital dollar, he said the most important thing is to “get it right.”

With so many conflicting vested interests in government and business in the US and Europe, the process will be laborious. A digital dollar, digital euro, and other cyber currencies based on blockchain technology are on the horizon. Under the current US administration, which has a far more globalist orientation, I expect coordination with G-7 and perhaps other friendly governments to challenge the emerging digital yuan, which will be the first digital currency to hit the market running. China has an advantage as the central planned political system puts regulation and other aspects in the hands of one leader with the final decision. The process in the US, Europe, and other countries will be far more challenging.

Digital currencies are the children of blockchain technology. The chicken or egg question between Bitcoin and blockchain is not essential as blockchain is the concept that propels the evolution of the financial revolution.