The crude oil futures market ran out of upside steam at the early July high and has made lower highs over the past seven weeks. At around the $62 per barrel level at the end of last week, the September futures contract was in a short-term bearish trend. Meanwhile, over the past year, the energy commodity made great strides on the upside.


The most recent selling reflects a long-overdue correction. The slowing Chinese economy, along with other factors, is likely weighing on crude oil. Crude oil futures take the stairs to the upside during rallies and an elevator lower when the price corrects. While we could see lower prices over the coming weeks and months, the underlying support issues facing the energy commodity suggest that it is not a time to become too bearish on petroleum as it continues to power the world.

As the delta variant of COVID-19 spreads throughout the unvaccinated population, with reports of some breakthrough cases in those who received vaccines, economic activity has begun the slow. Fears of a return of widespread cases have caused economic growth to slow. Meanwhile, China has cracked down on some sectors of its business sector that raise capital in the west, causing its economy to cool over the past weeks. The demand for energy has begun to decline, sending the crude oil price to its lowest level since late May over the past week. 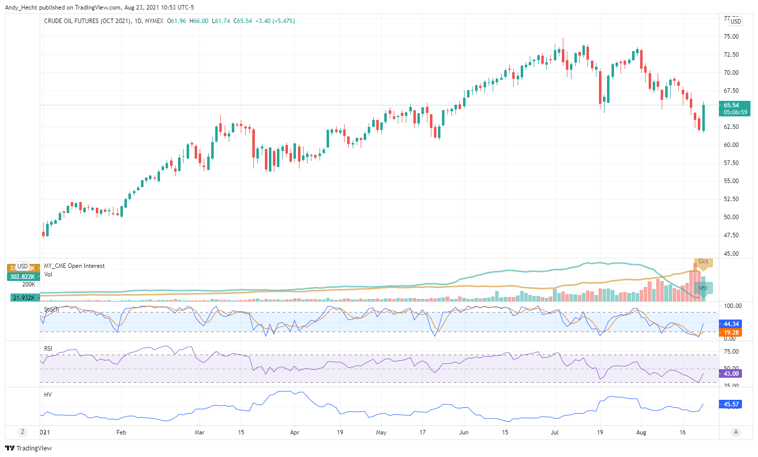 The chart of the now active month October NYMEX crude oil futures highlights the decline from a high of $74.77 per barrel on July 6. In July and August, crude oil has made lower highs and lower lows, falling to $61.82 on August 20, the lowest price since May 21. The next level of technical support stands at the May 21 $60.68 low on October futures.

Open interest, the total number of open long and short positions in the NYMEX crude oil futures market, has declined from 2.414 million contracts on July 6. The decline reflects long liquidation. Falling price and declining open interest are not typically a technical validation of an emerging bearish trend. Price momentum and relative strength indicators have dropped to oversold territory. As crude oil has been correcting slowly and not taking an elevator shaft lower, daily historical volatility was just below 27% on August 20.

Over the past week, the prospects for higher US interest rates lifted the US dollar index to its highest level in 2021. The dollar index rose over the 93.47 March high. A stronger dollar tends to weigh on commodity prices, and crude oil is no exception. However, the Fed canceled its in-person Jackson Hole event, citing the rising number of delta variant cases. We will soon find out if the central bank decides to stall tapering quantitative easing because of the virus. A prolonged period of inflationary monetary policy could cause raw material prices to resume their ascent.

President Biden pledged to address climate change during his 2020 campaign. Following that promise, he canceled the Keystone XL pipeline project on his first day in office by issuing an executive order. In May, the administration banned oil and gas drilling and fracking on federal lands in Alaska. While crude oil demand has been booming over the past months, US output stood at 11.4 million barrels per day as of August 13, 13% below the record high of 13.1 mbpd in March 2020.

Meanwhile, US crude oil and oil product inventories have declined in 2021. 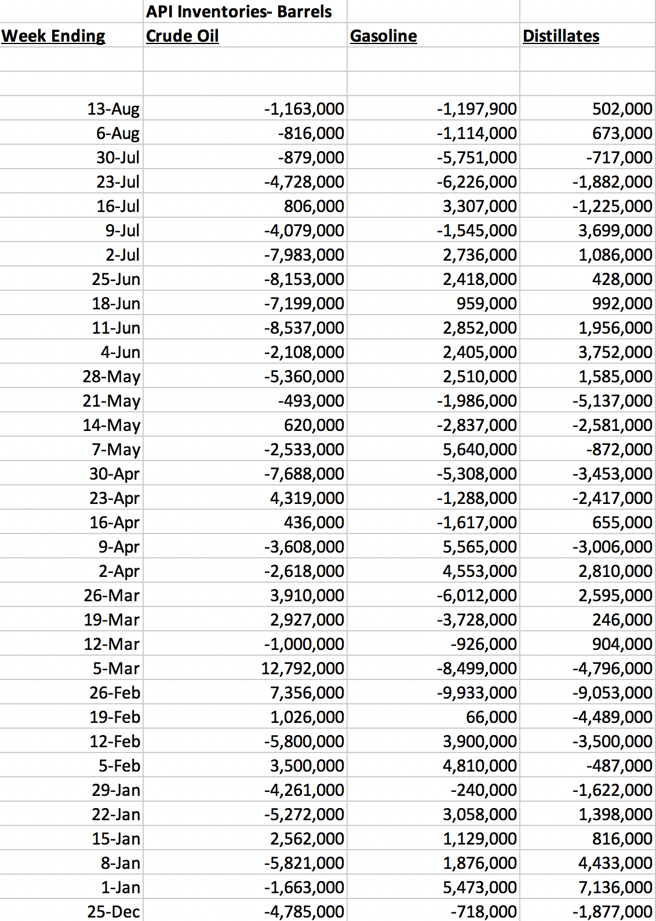 According to the American Petroleum Institute, US crude oil stockpiles declined by 51.508 million barrels from January 1 through August 13, 2021. Gasoline stocks were 4.9509 million barrels lower, and distillate inventories dropped by 9.571 million barrels. 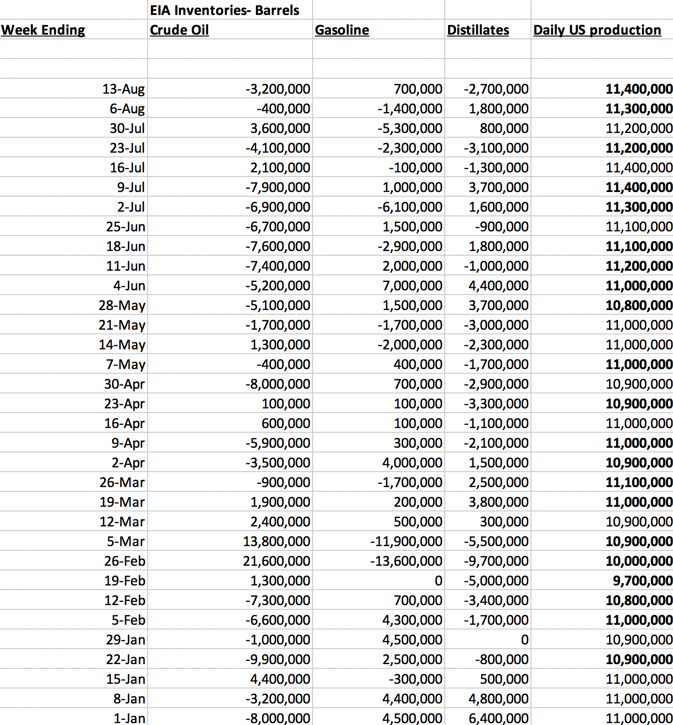 The Energy Information Administration data shows a 57.8 million barrel drop in crude oil stocks, with gasoline inventories 8.4 million barrels lower so far this year. Distillates have declined by 13.9 million barrels. US daily production has increased from 11.0 mbpd to 11.4 mbpd since early January, but it is insufficient to keep stockpiles from falling.

US energy policy is weighing on output as increased regulations, and a shift to a greener path for powering the US causes fossil fuel production to decline. Meanwhile, crude oil and oil product prices have moved substantially higher in 2021:

While the US is on a greener path of energy production or consumption, the US and the world continue to rely on crude oil and oil products for power.

For decades, the US struggled to achieve energy independence from the Middle East, home to over half the world’s crude oil reserves. Over the past years, rising shale production and a drill-baby-drill and frack-baby-frack policy caused the US to take the leadership role in output, achieving its goal. The change in energy policy under the Biden administration has shifted crude oil’s pricing power back to OPEC and the cartel’s partner, Russia. As the Saudi oil minister said earlier this year, “Drill-baby-drill is gone forever.”

At the height of the global pandemic, energy demand evaporated. Nearby Brent crude oil futures fell to the lowest price of this century at $16 per barrel. NYMEX futures fell below zero as the landlocked crude oil ran out of storage as inventories exploded. 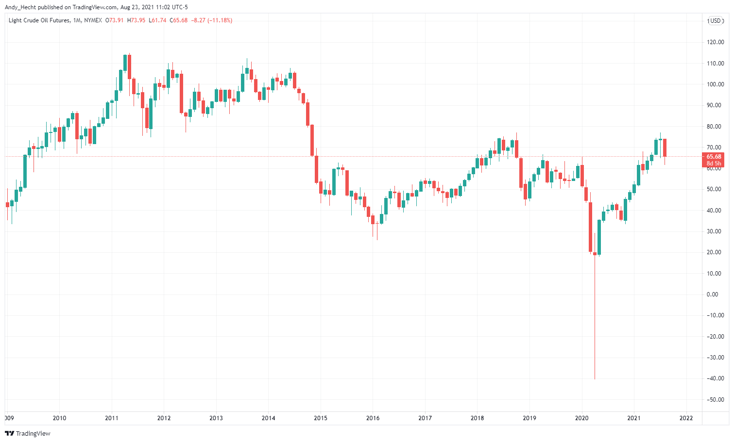 The US administration and crude oil- Comedy or Tragedy?

If the Biden administration should have learned anything from the current debacle in Afghanistan, timing is everything. The administration misjudged the Taliban’s ability to swoop across the country’s 34 provinces and capture its capital, Kabul, in short order. Transporting US citizens and Afghanis that assisted the US became a tragic chapter for the world’s wealthiest nation and leading military power.

Two weeks ago, before crude oil corrected, the Biden administration appealed to OPEC+ to produce more oil as gasoline prices had risen to multi-year highs. Opposition party Republicans and environmentalists noted that the President casts himself as a climate warrior moving the US towards cleaner energy to protect the planet. The request for OPEC to increase output only makes sense if their production comes from sources away from the earth.

After suffering under increasing shale production over the past years, OPEC+ does not have the US’s best interests at heart. The cartel is more likely to structure production policy to squeeze US consumers. After all, producing one barrel at $100 yields a better return than two at the $40 level.

The Biden administration has been in office for the past seven months. Immigration, Afghanistan, and energy policies have been far from successes over the period. One sector of the market could benefit from the events transpiring in Afghanistan. With banks closed, one of the few ways people can leave with life savings is to protect them in computer wallets in the cloud. Cryptos allow for transport on flash drives or access in other areas of the world via a secure password. Bitcoin, the leading cryptocurrency, posted gains over the past five consecutive weeks. The correction after the parabolic rally found a bottom. Flight capital is another reason supporting cryptos in a volatile world.

Levels to watch in crude oil

US energy policy remains bullish, despite the current correction in the crude oil futures market. OPEC and the Russians are not likely to cooperate with the Biden administration and heed the call for more output. They are more likely to cut production given the foreign policy tensions and signs of weakness in Afghanistan. 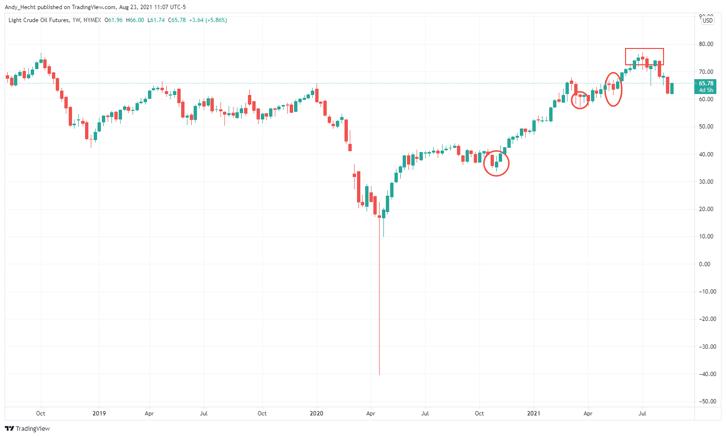 The NYMEX crude oil’s weekly chart shows support levels at $61.56, $57.25, and $33.64 per barrel. As crude oil is heading towards the end of the driving season, delta variant cases are rising, and the US and Chinese economies are slowing, a deeper correction is possible. Meanwhile, with OPEC+ back in control of the marginal oil barrel, the medium and long-term prospects for the energy commodity remain bullish. I expect higher highs in crude oil in 2022 and beyond.

US energy policy towards a greener path will change the oil market’s dynamics over the coming decades. Still, as petroleum continues to power the world in the medium term, the move to protecting the planet will lift oil’s price and fill OPEC+’s pockets over the coming years. I am short crude oil from a trend-following perspective, but US energy policy is likely to cause the fossil fuel to find a bottom at a higher level over the coming weeks. Follow those trends, they are your only friends.