No One Should Be Surprised That Energy Prices Are Exploding

Mark Fisher was a presence in the natural gas futures arena in the days before electronic trading, racking up profits that made him very wealthy.

On Wednesday, September 29, Mr. Fisher told CNBC that he does not see the November natural gas futures contract coming off the board below the October contract, making the $5.50 to $5.80 level a bottom. He warned that an early cold winter could take the price to $12 as consumers in the US follow European and Japanese consumers, “freaking out” about the supply situation in the natural gas arena.

When it comes to crude oil, Mark Fisher said that NYMEX crude oil demand remains robust, and the weather is cold, the price could move from $75 to over $100 per barrel level. He went on to say that “people have been spoiled by low energy prices.” They could be in for a shocking surprise. Meanwhile, no one should be shocked as the seeds for a bull market in the energy sector were planted on January 20, 2021.

It took decades to achieve energy independence in the US

For those of us old enough to remember the gasoline lines in the 1970s and the odd and even plate days where you could only fill your tank on certain days, that period marked the beginning of the US’s quest for energy independence. Over the past half-century, the country made great strides.

US ingenuity and technology allowed the nation to process corn into biofuel. The government mandates that support energy and agriculture reduces Middle Eastern crude oil imports. In the late 1970s, many young people headed for Alaska for high-paying jobs to extract petroleum from the earth’s crust and construct pipelines that carried the energy commodity to the lower forty-eight states.

Over the recent years, the US not only achieved energy independence but became a leading energy exporter. Technological advances in fracking and drilling increased output while lowering production costs. Discoveries of quadrillions of cubic feet of natural gas in the Marcellus and Utica shale regions increased reserves. Since necessity is the mother of invention, technology allowed for processing natural gas into liquid form to travel beyond the pipeline network. Today, LNG moves from the US via ocean vessels to regions worldwide where the price is substantially higher.

In March 2020, the US became the world’s leading crude oil producer with output of 13.1 million barrels per day, surpassing Russia and Saudi Arabia and pushing OPEC, the international oil cartel, into an abyss. Pricing power was in the hands of US producers with the ability to turn on production when prices rose and turn it off and turn to imports when it fell.

It took decades, but the US achieved the goal.

It took months to surrender it to OPEC+

On the campaign trail in 2020, President Biden pledged to address climate change by enforcing an energy policy that would favor alternative energy sources. Calling climate change an existential threat to humanity was a critical focus of the Democrat’s platform.
On his first day in the Oval Office, the new President issued an executive order canceling the Keystone XL pipeline project that carried petroleum from the Canadian oil sands in Alberta to Steele City, Nebraska, and beyond to the NYMEX crude oil delivery hub in Cushing, Oklahoma.

In March 2020, the US was an energy powerhouse. In September 2021, it surrendered control to other worldwide producers. After suffering under the weight of shale oil and output over the past years, OPEC+ is now positioned to squeeze higher prices from US and other consumers. It took less than one year and one-half for the balance of power to shift.
Last week, US generals and military leaders told Congress the US lost the twenty-year war in Afghanistan. It took less than eighteen months to lose control of energy.

Green is the future; fossil fuels are the present

There is no doubt that alternative energy is the future. It will take decades to fund and build wind, solar, nuclear, and other alternative energy sources to the point where fossil fuels are obsolete. Crude oil and natural gas may eventually go the way of whale oil. However, most cars in the US and worldwide continue to run on fossil fuels, which is not changing any time soon.

There are roughly 250 million vehicles in the US. The number has been stable over the past years. According to the US Energy Information Administration, 78% of the vehicles sold in the US will continue to run on gasoline twenty-five years from now.

Crude oil and natural gas continue to power the world. Fossil fuels are essential for industry and individuals. Increased regulations and policies to curb output will only serve to push prices higher, as we have seen over the past months. Moreover, no rational company is going to invest in US hydrocarbon production given the regulatory environment. OPEC and Russia are in the driver’s seat with their hands on the pricing wheel.

Anyone shocked by the price action in crude oil and natural gas futures markets likely thought that political promises to address climate change would never occur. This time, they were dead wrong.

Crude oil is trending towards the triple digits

US production put the former President in a position to ask OPEC+ to cut production when the price of crude oil fell like a stone at the beginning of the 2020 global pandemic. OPEC and Russia reduced output by an unprecedented 7.7 million barrels per day. NYMEX crude oil fell to a record low at negative $40.32 per barrel briefly before turning higher. 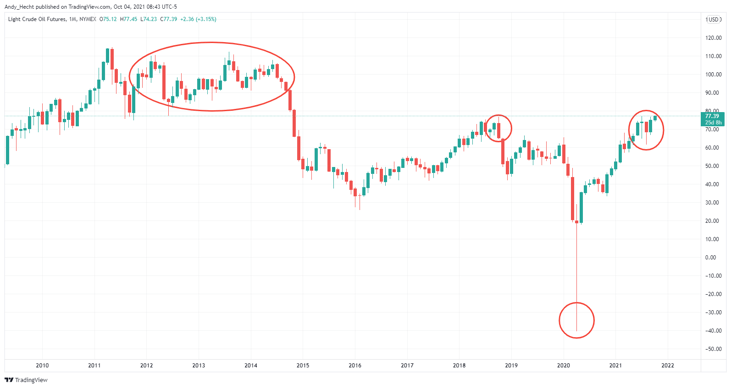 The monthly chart of nearby NYMEX crude oil futures highlights the explosive move from negative $40.32 in April 2020 to the most recent high at $76.98 in early July 2021. After correcting, crude oil has been moving towards a test of the recent high, trading to $76.67 per barrel last week and closing near the $76 level. The recent high was marginally above the peak from 2018 at $76.90, a technical gateway to the next resistance level from 2014 at over $100 per barrel.

NYMEX WTI crude oil futures are the pricing benchmark for around one-third of the world’s petroleum producers and consumers. The other two-thirds, including the Middle East, use the Brent futures benchmark.

The chart of nearby Brent crude oil futures shows the price reached the lowest price of this century at $16 per barrel in April 2020. Last week, it probed above $80 for the first time since October 2018. Technical resistance stands at the 2018 $86.74 high, a gateway to a triple-digit price for Brent crude oil.

OPEC+ would rather sell one barrel of crude oil at $100 than two at $40 per gallon. It would be comical if it weren’t tragically ironic that when the US administration asked the cartel to cut production, it rejected a request to increase output by the next administration after cooperating with the previous administration’s request for a production cut.

Natural gas is a wild beast

Crude oil has rallied substantially since April 2020 and was sitting at the highest price since 2018 at the end of last week. Natural gas, the other energy commodity the US had dominated, has gone ballistic on the upside.

At the low, the ultimate value investor put $10 billion into the natural gas market. Warren Buffett’s Berkshire Hathaway bought the transmission and pipeline assets from Dominion Energy for $6 billion in assumed debt and $4 billion in cash. The deal was announced in early July 2020. Mr. Buffett bought the low.

The monthly chart shows the parabolic rally that has taken natural gas from $1.432 in June 2020 to a high of $6.318 per MMBtu last week. While natural gas pulled back to around the $5.50 level, the price was still nearly quadruple the level when Warren Buffett increased Berkshire’s exposure to all interstate natural gas transmission in the US from 8% to 18%.

In an interview on CNBC on Wednesday, September 28, Mark Fisher said that, given the demand situation in Europe and Asia, a cold winter in the US could push natural gas futures as high as $12 per MMBtu, a level not seen since 2005 and 2008. Mark Fisher knows the natural gas market as he was the most successful energy floor trader on the NYMEX exchange before electronic trading.

Are you surprised that crude oil and natural gas prices are exploding and are likely to move much higher over the coming months and years? You shouldn’t be; it is just the elected US government fulfilling its promises at the top of the 2020 platform. We expect higher lows and higher highs to continue as US energy policy is the most significant factor for the coming years. OPEC+ is back in control, and the cartel’s mission is to provide its members with the highest price possible while “balancing” supply and demand in the energy market. With the US production declining as it takes a greener path, many will be walking rather than driving on the road to shortages and higher prices.