Natural gas is combustible as producers extract the energy commodity from the earth’s crust. The energy commodity’s price action has been equally volatile since the CME’s NYMEX division rolled out futures contracts over three decades ago in 1990.

The nearby NYMEX natural gas futures contract has traded from a low of $1.02 to a high of $15.65 per MMBtu. The futures price reflects natural gas’s value at its delivery point at the Henry Hub in Erath, Louisiana. The Henry Hub price is a benchmark. Local prices can vary and trade a substantial discount or premium to the nearby NYMEX futures.

Massive discoveries of quadrillions of cubic feet of natural gas in the Marcellus and Utica shale regions of the US had weighed on the price over the past years. Technological advances in fracking lowered the production cost. Since necessity is the mother of invention, the demand side of natural gas’s fundamental equation rose with supplies as natural gas replaced coal in power generation and liquification opened a new demand vertical. LNG now travels worldwide via ocean vessels and is not limited to pipeline transmission.

After falling to the lowest price in a quarter of a century in late June 2020 at $1.432 per MMBtu, the price has more than tripled. Last week, it probed at over $5 per MMBtu for the first time since February 2014, during the heart of a colder than average winter season.

With the start of the 2021/2022 winter season still over two months away, the natural gas futures market was in full winter mode last week as the price exploded higher. 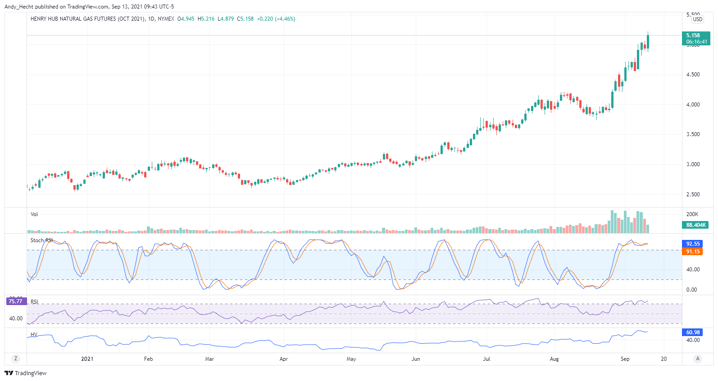 As the daily chart of October NYMEX natural gas futures highlights, natural gas futures eclipsed the $5 per MMBtu on September 8 and rose to a high of $5.058 on September 10.
Natural gas has made higher lows and higher highs throughout the 2021 injection season, with the latest highs coming last week. Open interest, the total number of open long and short positions in the natural gas futures market, rose in June and remained elevated as the price continued its ascent. The metric was at the highest level of 2021 last week and the highest level since early 2020. Increasing open interest when a futures market price moves higher is typically a technical validation of a bullish trend.

The move above $5 was a significant event for the natural gas market. 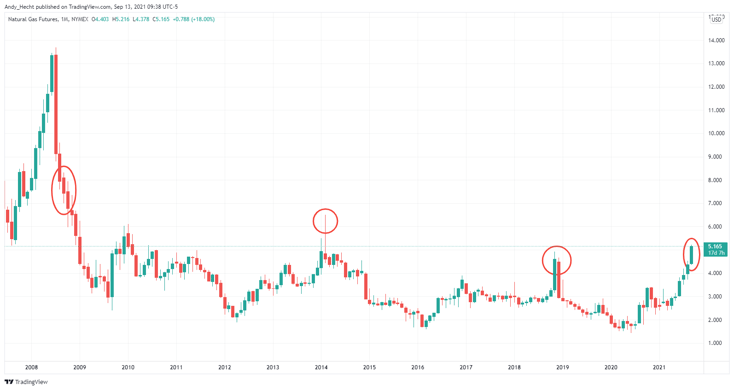 The monthly chart illustrates that natural gas futures rose above a critical technical resistance level at the November 2018 $4.929 per MMBtu peak. The energy commodity rose to its highest price since February 2014, a nearly eight-year high. The next technical target stands at the 2014 $6.493 high.

Heat and storms have been bullish

It may be early for natural gas to soar on seasonal factors as the beginning of the withdrawal season in mid-to-late November is still two months away. However, the price had been trending higher as the summer was warmer than average, increasing cooling demand. Moreover, the devastation caused by Hurricane Ida pushed the energy commodity to new highs. In mid-September, we are still in the dangerous period when storms can wreak havoc with natural gas infrastructure along the Gulf of Mexico.

Since natural gas replaced coal as the primary energy commodity generating power, cooling during the summer season has seen natural gas demand rise. For many years, natural gas was a winter commodity, but electricity requirements have made demand a more year-round affair.

Natural gas discoveries and technological advances in extracting the energy commodity from the earth’s crust via fracking fostered a new demand vertical. In the past, natural gas only traveled by pipelines, limiting demand to mostly landlocked areas. Liquefication evolved the market as it now travels around the globe to areas where the price is higher.

Natural gas prices are rising worldwide. On Thursday, September 9, in an interview on CNBC, Cheniere Energy’s (LNG) CEO said the company is “sold out” of LNG for the next two decades. Cheniere is doing so well it plans to pay shareholders a dividend. 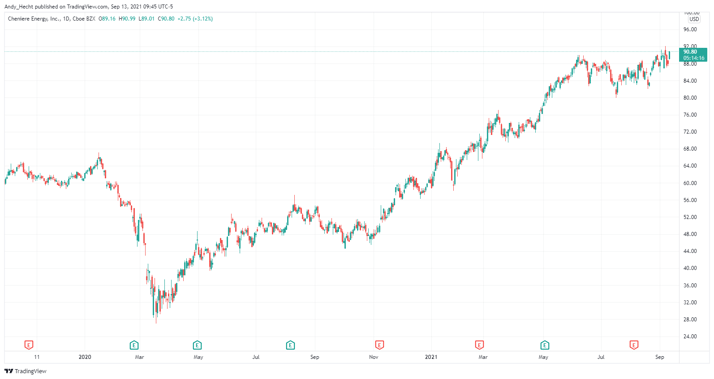 LNG shares reached a bottom in 2020 at $27.06. At $88.05 on September 10, the leading US LNG company’s stock was 225.4% higher as it almost kept pace with the energy commodity. The bottom line is LNG demand is booming and has caused natural gas to trickle instead of flow into storage over the past months.

While the weather, LNG, and overall inflationary pressures have provided lots of support for natural gas prices over the past months, the most significant factor has been the dramatic shift in US energy policy.

The Biden administration has put the US on a greener path towards renewable, cleaner energy. Fossil fuels like oil and gas have been pushed aside as the administration addresses climate change. The Obama administration did the same with coal, which became a four-letter word in the US energy sector.

The fact is that fossil fuels continue to power the world. It will take decades for technology to replace oil, gas, and coal with wind, solar, and other renewable energy sources. Even if the US and Europe move to alternative energy sources, the world’s most populous countries, China and India, are likely to continue to burn fossil fuels. While natural gas is up 251.3% from the 2020 low, coal gas has done even better. 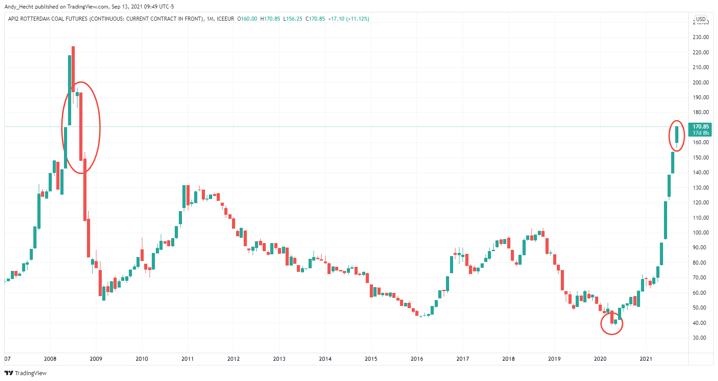 In 2021, the Biden administration canceled the Keystone XL pipeline, banned fracking for oil and gas on federal lands in Alaska, and is increasing regulations and taxes on the fossil fuel industry. Meanwhile, the administration gave the go-ahead for a natural gas pipeline from Russia into Germany.

The twenty-year war in Afghanistan ended, but the US war on hydrocarbons to battle climate change is only getting started. Meanwhile, the administration calls climate changes an “existential threat” to the world. It took twenty years, four US Presidents, billions if not trillions of dollars, and many lives to replace the Taliban with the Taliban.

It seems a bit hypocritical to transfer the production and pricing power in crude oil back to OPEC+. It took decades for the US to achieve energy independence. The current administration has replaced OPEC+ with OPEC+. Oil, natural gas, and coal are fossil fuels. Climate change is a global issue. The world continues to depend on these commodities. The US retreat only hands to other countries that will now dominate pricing. Moreover, the transfer occurs as the demand is exploding, putting more upside pressure on traditional energy prices.

In around ten weeks, the natural gas market will move into the 2021/2022 withdrawal season, when inventories begin to decline as heating demand rises. We are moving into the peak demand season with stockpiles at low levels. 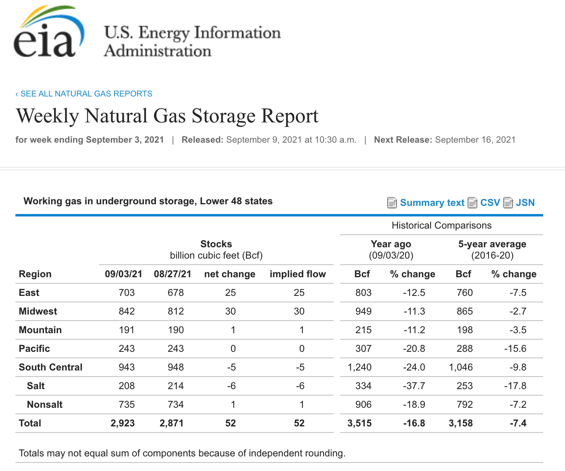 The chart highlights the Energy Information Administration’s latest natural gas inventory report. As of September 3, 2.923 trillion cubic feet of natural gas were stored throughout the United States in preparation for the upcoming winter season. Stocks are 16.8% below last year’s level and 7.4% under the five-year average for the beginning of September. At the end of the 2020 injection season, natural gas stocks rose to a high of 3.958 trillion cubic feet. An average injection of over 100 bcf per week would lift inventories to that level. The robust demand for LNG, lower production, and the regulatory environment under the current administration means that there will be the lowest level of natural gas in storage at the beginning of the winter months in years. A cold winter could cause a shortage of the energy commodity.

Meanwhile, heating homes will be costly during the coming winter season. If temperatures are colder than average, the bullish party could become parabolic for the volatile energy commodity. Natural gas reached a milestone over the past week as the price moved above the $5 per MMBtu level for the first time since 2014. In early July, NYMEX crude oil traded at its highest price since 2014. Coal is at a thirteen-year high.

The Taliban now controls Afghanistan, again. The US was formerly the world’s leading energy producer. The current green energy path means that energy independence has also slipped through the administration’s fingers.

Bull markets rarely move in straight lines. Corrections can be fast and furious. However, the trends remain higher, and a new set of fundamentals support higher lows as the bullish fossil fuel frenzy is no flash in the pan.