The Federal Reserve Open Market Committee will decidedly raise the upper bound of its Fed Funds limit to 1.75% today. At least this is what is predicted via The CME Group Fed Watch tool which puts the odds at 94.4%: 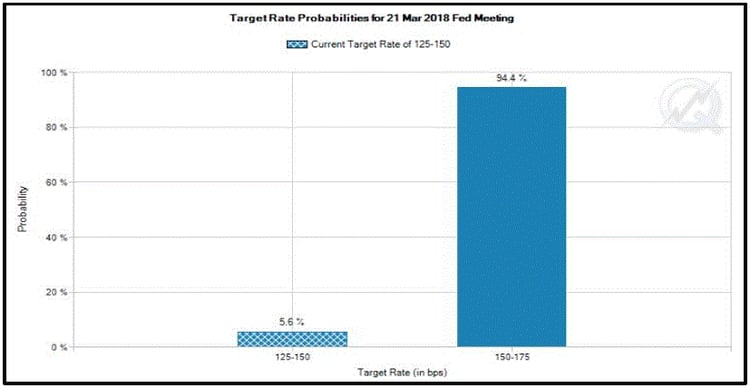 So, what does this mean? Well it means two things, first, the short rate inches ever so closely upward to the all-important US 10Y rate which means the curve continues to flatten.

Secondly, it means the banks around the globe will get an extra $5Bn a year give or take from this 25bp hike. In total and through the IOER (Interest on Excess Reserves) mechanism, which is essential in keeping inflation tame, the banks will receive in annual terms nearly $37Bn for doing nothing. Well, not doing nothing, rather keeping the money out of the hands of consumers and kept in the round about circle of central banking abyss. Here is the chart:

We love using that chart because it’s so simple, take the current Fed Funds rate and it displays the amount given to the banks by the FED for not lending money out to the system. It’s really that simple. So, we can expect all eyes today to be on that stupid dot plot chart, as if they are held accountable, as if! Anyway will 2018 turn out to be 3 hikes or 4, will December be a no show? Odds are for Fed Funds to end 2018 at 2.125% so right in the middle of the 3 or 4 hike scenarios, how convenient.

There is a flipside to all this monetary printing, interest rate hiking and we’re beginning to see the creep show up in the form of higher yearly interest costs and accelerating US debt levels. The US debt is now over $21 trillion, and it seems like we add a trillion dollars in debt each year now. The funny, or should we say sad thing about math is the larger the numbers get the faster they multiply and does anyone honestly think we can raise rates and stay fiscally sound? Look at Japan, that is the only proxy we need, in fact it’s a time machine: 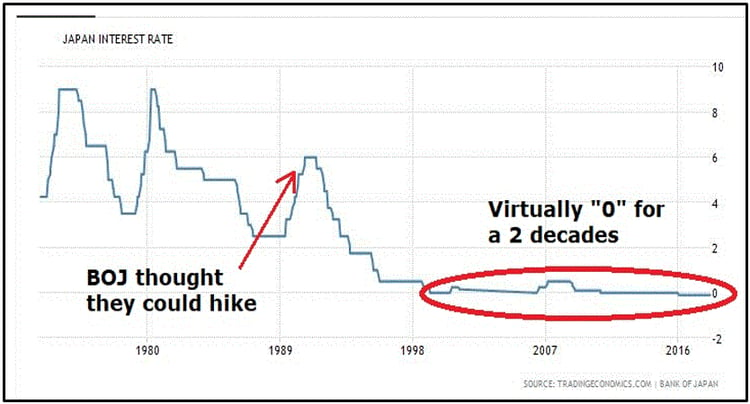 The Nikkei peaked on Dec. 29th, 1989 closing the year at 38,916. Many analysts were calling for Nikkei 45,000, Sony bought Columbia Pictures Entertainment that year for $3.45B and Mitsubishi Estate Bought the Rockefeller Center[1], all was going swimmingly. Then reality hit the BOJ was raising rates, raising nationwide sales tax, Emperor Hirohito passed away and as the old saying goes, “that’s all she wrote folks.”

Now you can look at that chart and say America is not like Japan, interest rates can never go to zero and stay there for 2 decades, or you can face the stark reality of mathematics and realize, you can’t issue debt indefinitely and raise interest rates, sorry they are oil and vinegar, as Japan has clearly displayed. There comes a point in time, a singularity by which there is no return and we have passed that long ago. So, we oblige the FED to embark on such an envious path, but as our long-time readers know, it’s time they are truly buying nothing more.

Well nothing more than private assets, private shares, private debt, well you get the picture, the FED and the rest of the central banks aren’t just supporting the markets, they have become and are by default, “the market.”

Ok with all that tutorial out of the way, what else have we learned over the last week?

In the aftermath of Trump letting go Mr. Cohn, the administration announced that none other than CNBC’s own Larry Kudlow would be named Trump’s top economic adviser. Our readers know our disdain for media types, but we will cut Kudlow a break here and give him a chance. He is extremely knowledgeable and seems quite rational in his thought processes and worked as an adviser during the Reagan administration.

Some of his recent thoughts on tariffs and trade specifically highlight NAFTA and the fact that it needs to be fixed and refurbished, he also went on to say it’s in the country’s economic and national security interests to get NAFTA fixed. Kudlow is not a huge fan of tariffs and punishing our partners but will see just exactly how much Trump is ready to acquiesce on any of those deals.

Walmart stock continues to languish, and word was out last week that an internal whistleblower and former director of business development leaked information regarding misleading e-commerce results. In a report from Bloomberg, information regarding the firing of Tri Huynh was tied to the director raising concerns about Walmart’s “overly aggressive push to show meteoric growth in its e-commerce business by any means possible -- even, illegitimate ones.”[1]

Facebook was hammered as political research firm Cambridge Analytica allegedly harvested 50 million user profiles. Seems Facebook is scapegoating saying there was an agreement in place for app developers not to sell user data, and there is no possible way they could have policed that. The alleged app in question is “Thisisyourdigitallife” a kind of personality test, which allowed Cambridge to access user’s data through an affiliate firm called Global Science Research, reported the Guardian[2]. Zuckerberg has remained missing and silent on the situation, which is not what you want from a CEO at a time like this, giving his arrogant nature, we aren’t too surprised.

Anyway, now there is a growing #DeleteFacebook movement and damage control should be in order but will see how this story progresses. As for the stock its down around 10% from its recent high of $186 trading near $166 now.

Just to touch a bit on the Bitcoin Crypto space, Fox Business had some great interviews last week. One featured Peter Thiel who is a big proponent of Bitcoin and a major supporter and another video focused upon an interesting new startup called Abra. Abra, a new start up in the Crypto Currency space has built a very user-friendly app and have raised $40 million in new funding. The interview link is here

Ok let’s view a few technical charts as we enter FOMC day, all charts provided by Keystone Charts Inc. First up, the SP500 future, showing resistance near term 2730 which may see a run to 2750 area if broken, but we suspect the bigger level resides below at 2670:

The QQQs have support at 165.63 with a gap above near the 172 area, but trendline is looming close by:

As for the US Government 10Y yield chart, you can see that 2.92% is huge and we feel any attempt there will be bought into by large players defending and that lower rates should ensue. A break of 2.79% will pave the way for a retest down to 2.67%: 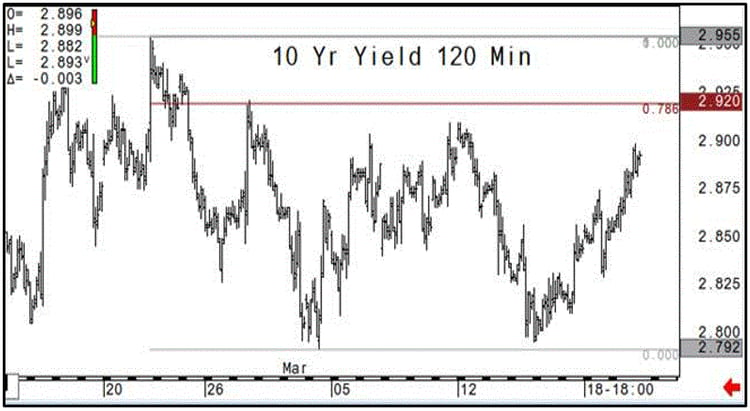 The April Gold futures contract shows the consistent decline since Mid-February and only a move above 1325 area will renew bullish hopes, 1291 below is huge: 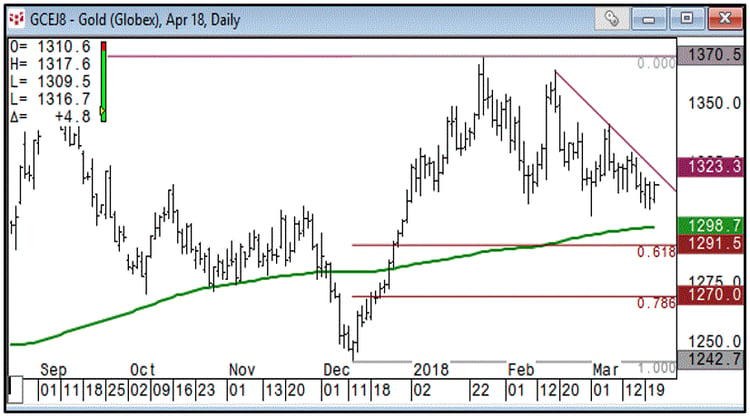 The final chart is the May Crude Oil future which has popped $2 after breaking the $62 level, $64.22 is huge and if it doesn’t hold initially expect some stops to be run above there: 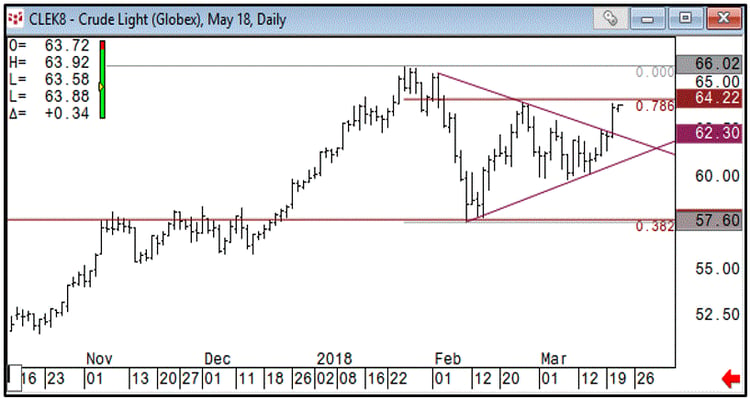 Alright that should do it for this week’s update, weekly settles are below. We hope you have a great trading week and as always thank you for reading. We hope you learned something new this week as the ever-changing investment climate provides ample topics for discussion.

We have to say that the Facebook charge is going to have some repercussions and the increased usage of people’s data without their true carnal knowledge is troublesome to say the least.

Coming from the investment side which is highly regulated, and consumer protected, one would think that the only solution is to clamp down on Facebook, Alphabet and everyone else who sells data for profit. Maybe we should copyright ourselves, this way at least there is compensation due when someone infringes, right? Anyway, make it a great week, Cheers!