The June CPI, South Africa, and Another Trial in Precious Metals

Gold was sitting around the $1825 on Friday, July 16. Silver was over $26, platinum was near the $1140 level, and palladium was around $2700 per ounce. All four of the precious metals that trade on the COMEX and NYMEX divisions of the Chicago Mercantile Exchange have been trending higher over the past years. Gold and palladium reached all-time highs over the past year.

Precious metals tend to rise in inflationary environments as the economic condition erodes money’s purchasing power. The tidal wave of central bank liquidity and tsunami of government stimulus has increased the money supply exponentially over the past year. Rising money supply weighs on fiat currency values. While all four of the precious metals are below their highs for 2021 and over the past years, the path of least resistance for prices on a long-term basis remains higher.

When it comes to gold, every substantial price dip has been a buying opportunity over the past two decades. The current environment suggests that it will continue. Moreover, the recent events in South Africa, a leading gold and platinum group metals producer, could put additional upward pressure on prices.

The June CPI comes in on fire

The June Consumer Price Index rose for the third consecutive month posting a 5.4% increase in June. Excluding food and energy, it was 4.5% higher, the most substantial gain since September 1991. While the Fed and other analysts blamed one-third of the rise on used car and truck prices, any consumer knows prices are rapidly rising. The Fed continues to view the data as “transitory.”

The market’s reaction continues to be another indication that the central bank will roll out plans to taper quantitative easing and schedule liftoff from the zero percent short-term Fed Funds rate. However, one factor may make any move by the central bank moot.

The inflation data is not a validation of "transitory"

The Fed Chairman and the Secretary of the Treasury believe that inflationary pressures are “transitory,” blaming the data on pandemic-inspired bottlenecks in the supply chain. However, with Congress discussing another $3.5 trillion in spending, even if the Fed tightens credit, the government’s stimulus tsunami continues to flood the financial system.

The CPI data and rising retail prices are the price tag for the stimulus and tidal wave of central bank liquidity that began over one year ago.

Passing a bullish baton from one sector to the next

We have seen inflationary pressures rise in markets across all asset classes. The economic condition erodes money’s purchasing power. The stock market has risen to all-time highs. We witnessed parabolic moves in cryptocurrencies earlier this year. While Bitcoin, Ethereum, and many other cryptos halved in value from the April and May highs, they remain far higher than at the end of 2020 and many times the price levels at the 2020 lows. In commodities, gold rose to a record high in August 2020. While the yellow metal corrected, it continues to consolidate at above the $1800 per ounce level at the end of last week. Silver rose to its highest level since 2013 when it probed above the $30 level in February before correcting. Platinum rose to its highest price since 2014 before moving lower. In May, palladium, along with lumber and copper, reached all-time highs. Rhodium, a platinum group metal that only trades in the physical market, reached almost $30,000 per ounce this year.

The raw materials asset class has been passing the bullish baton from sector to sector in an inflationary relay race over the past year. Bull markets rarely move in a straight line, but the trends remain bullish, reflecting the rising inflationary pressures.

After another attempt at a rally, precious metals sold off at the end of last week. The prospects for higher interest rates push the US dollar higher, which tends to be bearish for the precious metals. However, gold remained above $1800 per ounce, silver is over the $25.50 level, platinum was at $1100, palladium was around $2.640, and rhodium was at a midpoint of $19,100.

South Africa remains a leading producer of platinum group metals. 72% of annual platinum supplies come from South Africa, along with 36% of palladium, 82% of rhodium, 81% of ruthenium, and 87% of iridium. Ruthenium and iridium are other platinum group metals that trade in the physical market. While South African gold production has declined over the past year, the country still produced around 99.2 metric tons of gold in 2020.

South Africa is currently facing the worst political violence since apartheid ended 27 years ago. Violent riots and looting in the aftermath of the jailing of former President Jacob Zuma are gripping the country. Persistent poverty and the global pandemic’s toll have only exacerbated political violence and upheaval. As South Africa faces the potential for a civil war, precious metals production could suffer over the coming months and perhaps years, creating the PGM shortages and limiting gold output from the mineral-rich nation.

Meanwhile, the greener path for energy policy only supports the demand for platinum group metals. As supplies from South Africa may decline, the demand will continue to grow, putting upward pressure on prices. Rising inflation and the South African political landscape support all precious metals prices.

Meanwhile, this week, two traders accused of felony-level crimes in the precious metal markets go on trial in Chicago. Federal District Court Judge John Z. Lee will preside over the trial of John Pacillo and Edward Bases. The pair last traded for Bank of America Merrill Lynch. Mr. Bases had traded precious metals for Morgan Stanley, Deutsche Bank, Bear Stearns, and Merrill Lynch since the 1990s, while Mr. Pacillo has an equally long resume. A jury at the most recent Chicago trials of two Deutsche Bank traders, John Vorley and Cedric Chanu, returned guilty verdicts. Both were sentenced to one year in prison. Bases and Pacillo pleaded not guilty to the charges. A jury of their peers will decide their fate this week. More traders, including three from JP Morgan Chase, await their days in court.

While the trials and sentences will not impact precious metals prices, trader’s behavior will change as a prison cell, and lifelong branding as a felon is a far cry from the comforts of a trading room. I ran one of the leading precious metals dealing desks in the 1980s and 1990s and know some of those charged, including Mr. Bases. I will save any comments for after the accused have their days in court.

The next leg up for gold, silver, platinum, palladium, and other PGMs could be on the horizon

Platinum group metals suffer from illiquidity on the futures exchange. The lack of visible stockpiles and the supply versus demand equations in the PGMs does not allow for robust futures or forward markets. Less liquid commodities tend to experience far higher volatility levels. Lumber is one of the least liquid futures markets. The price of wood from the $251.50 level in April 2020 to $1711.20 one year later in May 2021. At the end of last week, the price was below $550. Traders call markets like lumber roach motels as market participants can get into long or short risk positions but getting out when the market moves in the opposite directions can be more than a challenge. Platinum and palladium futures quality as roach motels.

Meanwhile, increasing demand for PGMs because of the rise of environmentally friendly energy policy supports their prices. The upheaval in South Africa may only exacerbate upside price action if supplies decline. When it comes to gold, every dip over the past two decades has been a buying opportunity. 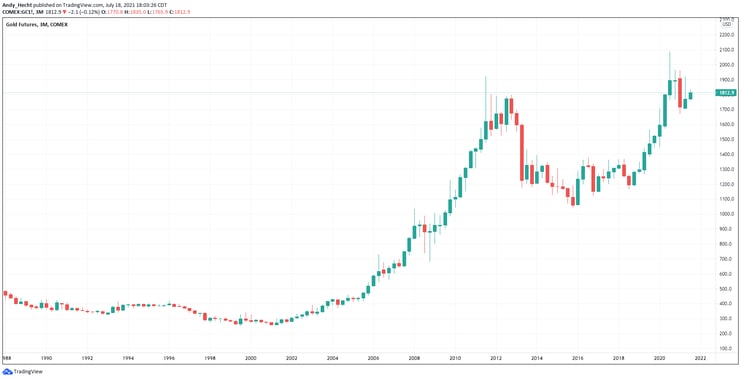 The quarterly chart highlights the bullish price action in gold and the pattern of higher lows and higher highs that began in 1999 at $252.50 per ounce. Gold may have corrected from the August 2020 $2063 high, but the price action remains in bullish mode from a long-term perspective.

Silver is a highly speculative metal that attracts herd behavior when the price begins to trend. In 2020, silver traded in an $18.175 range from low to high. So far in 2021, the trading band has been only $6.61, with silver making a marginally higher high and higher low. When precious metals embark on the next leg to the upside, silver is likely to have a magnetic pull for a herd of buyers.

Rising inflation and the political landscape in South Africa are bullish for precious metals. While the US Federal Reserve may pivot to a more hawkish monetary policy stance, government stimulus shows no sign of slowing. It may only be a matter of time before the precious metals sector takes the bullish baton in the inflationary relay race that has been underway since the 2020 bottoms.