Micro Bitcoin Futures Will Increase the Addressable Market -ETFs next?

I remember a commercial that aired in New York for the lottery. The memorable slogan was “All you need is a dollar and a dream.” The odds of hitting the six lotto numbers along with the Powerball number were infinitesimal. At a recent Powerball drawing in Tennessee was one in 292.2 million. People have a one in 2.32 million chance of being killed in a lightning strike, to put the odds in perspective.

Meanwhile, a $1 investment in Bitcoin eleven short years ago bought 166.67 tokens at six cents per coin. At the April 14 high at $65,520, the $1 invested was worth over $1.09 million, a jackpot. The incredible return continues to fuel widespread speculation in the digital currency arena. Each day new tokens come to market. While Bitcoin and Ethereum are the leaders, there were another over 9,500 tokens, and rising, at the end of last week.

While Bitcoin’s value has risen steadily over the past eleven years, it has been a bumpy road. The Mount Gox debacle in 2014 shook confidence in the digital currency market and sent Bitcoin’s price substantially lower. High-profit critics over the past years have called Bitcoin and the other cryptocurrencies everything from a scam to a Ponzi scheme. JP Morgan Chase’s Jamie Dimon called it a “fraud” in 2017. Warren Buffet said it was financial “rat poison squared.” They were wrong as the digital currencies continue to challenge the status quo.

The CME rolled out its first futures contract in December 2017. The move pushed Bitcoin’s value over the $20,000 level.

This week, the CME will introduce a micro Bitcoin futures contract, which is likely to add liquidity to the market and help in the maturation process.

Bitcoin has been around for a little over a decade. From humble beginnings where those with the foresight to mine the tokens found a treasure if they held it, the price of the leading cryptocurrency has vaulted to new highs each time acceptance grew.

In late 2017, the Chicago Mercantile Exchange rolled out futures contracts that sent the price to the first record high at over $20,000 per token. 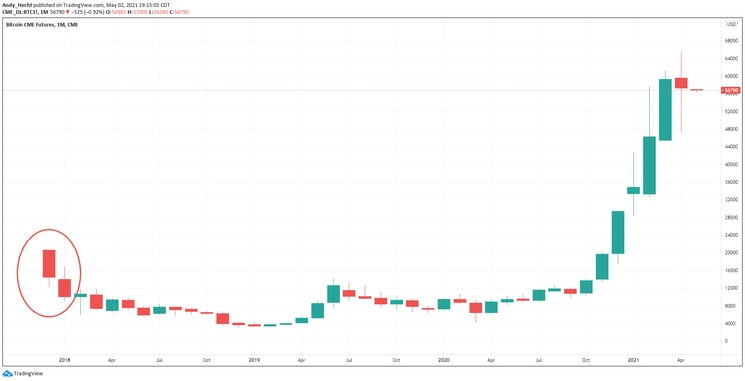 This picture shows the incredible rise from price levels before the CME’s futures contract, which provided liquidity and expanded the addressable market. The CME rolled out Ethereum futures on February 8 with the same impact on the price of the second-leading digital currency.

Ether’s price rose in anticipation of the futures contract, but the February 8 rollout turbocharged the gains. Ethereum hit an all-time high at $2803.75 on April 29 as the bullish party continues to push the price to higher highs.

Meanwhile, other events have fostered a rising acceptance for the asset class, which has come a long way from Jamie Dimon’s classification as a “fraud” and Warren Buffett’s characterization as “financial rat poison squared.” Last September, Jack Dorsey’s Square (SQ), a payments technology company, bought $50 million worth of Bitcoin. They added another $170 million in purchases in early 2021. Meanwhile, Elon Musk’s Tesla (TSLA) swooped in and bought $1.5 billion of Bitcoin early this year and said it would accept the cryptocurrency for its EVs. Tesla is not the only company accepting cryptos these days. Here’s a link for the growing number of companies and businesses accepting Bitcoins and other digital currencies.

The bottom line is that the more companies accept Bitcoin, the more investment capital pours into the market. At the end of last week, Bitcoin’s market cap stood at roughly the $1.082 trillion level.

The Coinbase listing on NASDAQ was the last significant event. On April 14, the listing date, Bitcoin reached its latest record high at $65,520 per token.

Next up- Micro futures

The five-token Bitcoin contract had a nominal value of $327,600 when the price reached its April 14 high. Original or initial margin requirements or the good-faith deposit required to trade a Bitcoin future was roughly $160,000 per contract, precluding many market participants from trading the product. The extreme volatility in Bitcoin’s price requires a high margin level.

This week, on May 3, the CME rolled out the Micro Bitcoin future, a pint-sized product that makes Bitcoin futures trading and investing available to a broader audience. The contract is 1/50th of the size of the original futures (0.1 Bitcoin per micro contract), meaning margin requirements will be around the $2,500 level.

Micro futures will allow for hedging, speculation, and trading at a more manageable risk level for many.

Expanding the addressable market through lower margin requirements- Real Estate is about location; other markets are all about liquidity

Mature markets offer buyers and sellers the ability to execute purchases or sales on tight bid-offer spreads. Tight spreads are only possible when there is enough critical mass or trading volume created by a substantial number of market participants with interest at all price levels.

The CME’s micro product for Bitcoin that lowers nominal margin requirements could have an explosive impact on liquidity. The bottom line is that lower capital requirements make the market available to a growing addressable market, translating to increased liquidity. Liquidity measures include volume and open interest, the total number of open long and short positions in the futures contract.

Moreover, increasing liquidity often causes price volatility to decline. We witnessed this in the natural gas futures arena, which began trading in 1990 on the CME’s NYMEX division. The price ranged from 1990 through 2005 was from $1.02 to $15.65 per MMBtu, and the price action was wild at times. Over the first fifteen years of trading, the highest-level open interest ever reached was below 600,000 contracts. As the market matured and liquidity grew, open interest rose to over 1.6 million contracts. Over the past twelve years, increased liquidity led to a significant decline in price variance.

The market cap is still low and has room to rise

At the end of last week, the digital currency asset class’s market cap was roughly $2.234 trillion. The asset class currently holds Bitcoin, Ethereum, and another 9,520 digital currencies. Each day the number of new entrants to the market rises.

A market cap in the trillion is substantial for the burgeoning asset class, but it is not all that significant when you consider that Apple (AAPL) alone had a market cap of $2.207 trillion at the end of last week. Apple (AAPL), Amazon (AMZN), Microsoft (MSFT), and Alphabet (GOOG) had a combined $7.48 trillion market cap. As you can see, if digital currencies continue to grow, the market cap could rise far higher over the coming years.

As liquidity is critical, the CME micro product will likely foster increased market participation and trading. While the micros could have a bullish impact on Bitcoin’s price, the market is waiting for the mother of all liquidity events that bring the digital assets to stock market investors.

The next event will be the ETFs- It could take time

ETFs and ETNs have revolutionized markets bringing risk vehicles to the stock market where the addressable market of traders and investors is enormous. Products like gold and other ETF and ETN products substantially impacted the futures markets as the high level of interest translated to hedging and other volume-producing activities in the futures arena. ETFs and ETNs on Bitcoin, Ethereum, and other digital currencies and baskets of cryptos should have a similar impact.

The decision on crypto ETF and ETN products is in the hands of the Securities and Exchange Commission and its new Chairperson, Gary Gensler.

Chairman Gensler was the Chairman of the Commodity Futures Trading Commission when it analyzed Bitcoin futures. Between his post at the head of the CFTC and the SEC, he was Professor Gensler at MIT, teaching a Fintech course.

Chairman Gensler’s SEC will seek to protect the public when it rolls out ETF and ETN products, which may take some time. However, it is not a question of if ETF and ETNs are coming; it is when they will arrive. Meanwhile, micro Bitcoin futures on the CME are another maturation step that follows on the heels of Coinbase’s (COIN) listing. It will be interesting to see if the micros lift Bitcoin to another new peak above the April 14 $65,520 high.