The tech-heavy NASDAQ 100 E-Mini futures contract (NQ) hit a high of 4,884 in March 2000, nearly four years after Fed Chairman Alan Greenspan said that there was “irrational exuberance” in the internet stocks. By October 2002, the index fell to 797.50 as the tech sector bubble burst.

It took the NASDAQ over sixteen years to climb back to the March 2020 high. Since then, the rise has been meteoric, with the index reaching its most recent peak on April 29, 2021, at the 14,064 level. Since the late April peak, the index has made lower highs and lower lows, which is never a good technical sign for a market.

The NASDAQ was the place to be in 2020 as the index exploded higher on a year-on-year basis. However, the best performing sector during one period often becomes the worst or lags during the following periods. The tech sector faces more than a few challenges as we move towards the second half of 2021.

The best-performing index in 2020 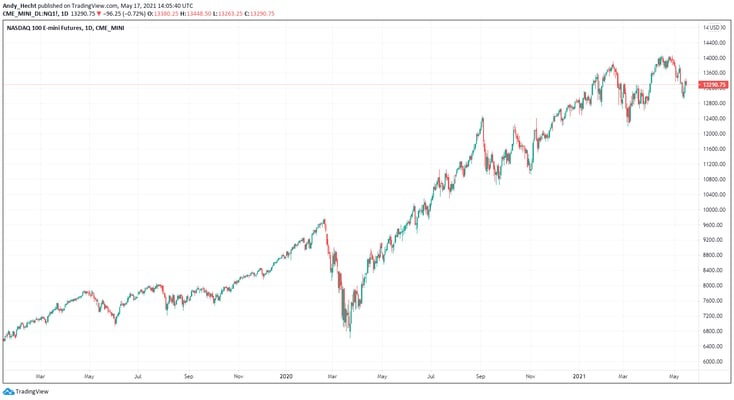 The NASDAQ was the best performing stock market index in 2020. The DJIA gained 7.25% last year while the S&P 500 moved 16.3% higher. The over 40% gain left the other stock market benchmarks in the dust. Meanwhile, COVID-19 set the stage for incredible gains in technology stocks.

The demand for technology in 2020 caused earnings to soar and hastened the decline of retail businesses. The leading technology companies rose to new all-time highs, with earnings reports far-exceeding even the most bullish analyst expectations. However, as the pandemic fades into the market’s rearview mirror, technology companies could find themselves victims of their success, which has spotlighted the wealth and dominance by the companies, their founders and CEOs, and key employees.

During the 2020 Presidential campaign’s primary for the Democrats, the party’s progressive wing took a position that billionaires should not exist. The torch carrier for progressives, Vermont Senator Bernie Sanders, said just that during the primaries. Massachusetts Senator Elizabeth Warren said that the US system provides the most successful people the ability to amass incredible wealth. President Joe Biden’s administration has taken a far more progressive approach to governing than even Senators Sanders and Warren had expected.

The administration and Congress, along with the Republican opposition, have expressed more than a few concerns about the dominant position that market caps near or over the trillion-dollar level affords the technology leaders like Apple (AAPL), Microsoft (MSFT), Alphabet (GOOG), Amazon (AMZN), Facebook (FB), and other top social media companies.

Technology companies are global, the potential for increased regulations that puts a leash on the dominance that interferes with competition could weigh on earnings over the coming months and years. The EU and US legislators seem to be in lockstep in wanting to control the growing power of these technology companies with regulations.

A bearish cocktail of rising taxes and inflation

Senators Sanders and Warren have proposed an annual wealth tax with little chance of passage through the US Senate. However, President Biden will increase corporate and individual tax rates. He is looking to boost the capital gains rate for the wealthiest Americans, making over $1 million per year, to 43.4%. With state and local tax rates, that would boost capital gains to well over 50%. Moreover, the administration has been making noises about lowering the threshold for inheritance taxes and eliminating step-up valuation practices. And, savings in retirement plans could push many into higher tax brackets. The President pledged he would not increase taxes on those who make under $400,000 per year, but we could see stock holdings and inflationary pressures push gross incomes over that level.

The substantial gains in technology stocks put a bullseye on the shares in a rising tax environment. We could see shareholders forced to sell significant percentages of their holdings to pay inheritance and other taxes.

Over the past years, the path of least resistance of the stock market has been higher thanks to natural buying each day from tax-protected IRA, 401K, SEP, and other accounts. As taxes rise, we could see natural buying turn to natural selling, pushing stocks lower.

Meanwhile, commodity prices have been rising, and interest rates further out along the yield curve have increased over the past year. In May alone, copper, palladium, and lumber prices reached all-time highs. Grain prices recently rose to the highest levels since 2012-2013. The latest April CPI data came in at 0.8% compared to forecasts at 0.2%. Increasing inflationary pressures could cause the Fed to begin to taper asset purchases and increase the short-term Fed Funds rate over the coming months. Rising interest rates are typically bearish for the stock market as higher fixed-income yields attract capital that has been flowing into stocks.

The risk of a significant correction remains high

The NASDAQ remains at a lofty level, even after the latest correction since April 29. The pattern of lower highs and lower lows could be a harbinger of a coming correction.
With a regulatory bullseye on its back, rising taxes, and inflationary pressures, the technology sector could become the leader on the downside over the coming months as it had been the leader on the upside in 2020.

Moreover, the market has become accustomed to earnings levels that could be unsustainable in the post-pandemic era. After being cooped up for more than a year, people are venturing out and returning to the workplace, which could cause a decline in the dependence on technology.

Four years after Alan Greenspan called the rise in technology stocks “irrational exuberance,” the market collapsed. It took sixteen years for it to recover to a higher high. It may not be a question of if a severe correction in the technology sector happens, but when it will occur. Be careful out there. Markets reflect the political and economic landscapes, which are problematic for the tech sector.