In late April 2020, the corn price fell to its lowest level since 2008 when the continuous corn futures contract found a bottom at $3.0025 per bushel. The pandemic pushed prices lower across all asset classes. Corn is the primary ingredient in US ethanol production. The ethanol mandate that requires a blend of gasoline and biofuel in the US closely ties corn’s price to crude oil and gasoline. In April 2020, crude oil fell below zero to a low of negative $40.32 per barrel. Gasoline prices declined to 37.60 cents per gallon wholesale in March 2020, the lowest price since 1999. The price carnage in the energy sector and selling in all markets pushed corn to the $3 level where it found a bottom.

Last week, corn moved to its highest price since July 2013 at nearly double the April 2020 low. Nearby May futures probed above the $6 per bushel level.

Corn probes above $6 for the first time since 2013

On April 15, corn futures put in the most recent high when they traded to $6.015 per bushel on the nearby March futures contract. 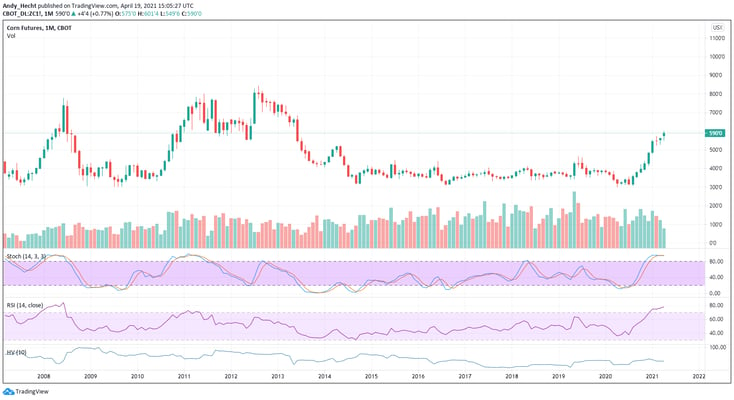 The chart highlights eight consecutive months of gains in the corn market as of mid-April 2021. A close above the $5.6425 level at the end of April will mark the ninth straight monthly price increase in the coarse grain.


Open interest, the total number of long and short positions in the corn futures arena has been rising with the grain’s price. Increasing open interest as the price of a futures market rises is typically a validation of a bullish trend. Monthly price momentum and relative strength indicators are in overbought conditions, but they continue to rise. Monthly historical volatility at 22.31% signifies the rally is slow and steady.

The 2021 crop year in the US has started. This year, farmers are likely to plant more soybeans than corn on their acreage. The long-term average for the corn-soybean ratio is around the 2.4 bushels of corn value in each bushel of soybeans value.

The chart of November new-crop soybean futures divided by December new-crop corn futures shows that while the ratio dropped from over 2.6:1 to the 2.48:1 level, soybeans continue to yield the best financial prospects for farmers at the new crop prices. Therefore, we should expect them to favor beans over corn, even though the corn price is at an eight-year high. Soybean demand from China continues to be off the charts in early 2021.

Keep an eye on gasoline and ethanol prices

The US ethanol mandate ties corn’s price to gasoline. The US is the world’s leading corn producer and exporter. Corn is the input into US ethanol processing. In Brazil, sugar is the input. Like corn, sugar prices have been rallying over the past months as the demand for ethanol rises with gasoline prices. 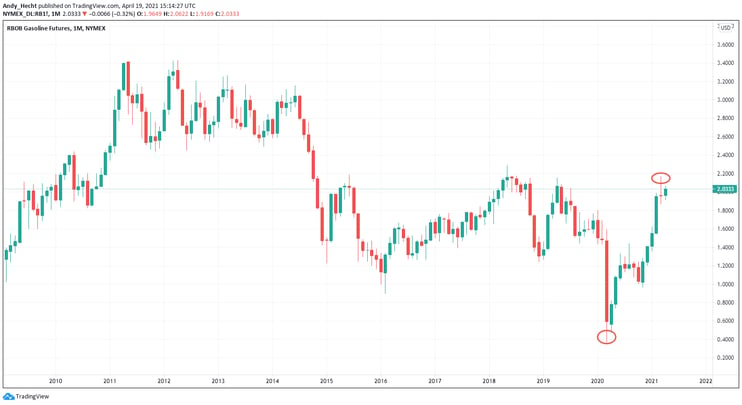 The monthly ethanol futures chart illustrates that the biofuel’s cost has risen to its highest level since December 2014 at $2.01 per gallon. Higher ethanol prices support higher corn prices. 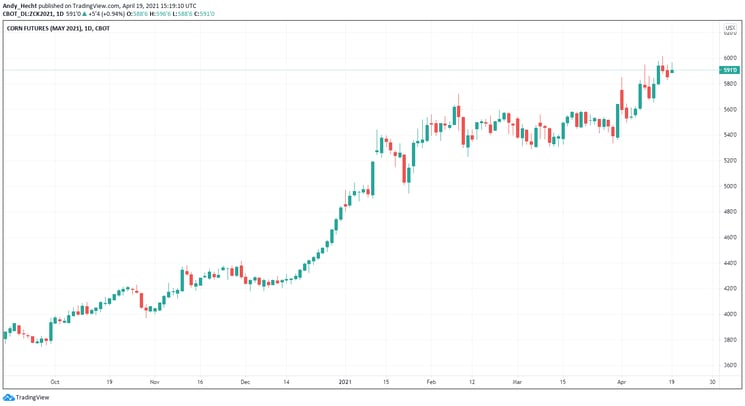 The bullish trend in corn continues to take the price to new multi-year highs as of the end of last week. Meanwhile, as the seeds go into the ground, the weather conditions across the US’s fertile plains will determine the path of least resistance for corn prices over the coming weeks and months. With the price flirting with $6 per bushel, any drought conditions in the US could have an explosive impact on prices. In 2012, when corn rose to its record high, it was dry conditions that pushed the price over the $8.40 per bushel level for the first time. A drought in 2021 could mean even higher highs.

Backwardation as the market has high hopes for 2021 output

A look at the forward corn curve tells us that the market is optimistic about the 2021 crop.

Corn’s term structure as of April 16 shows that while the May contract settled at $5.8550 per bushel, new-crop December corn futures were at the $5.1225 level, a 73.25 cents backwardation or discount for the new-crop corn.

The forward curve tells us traders believe that corn supplies will satisfy global requirements after this crop year. However, that could be a leap of faith as Mother Nature will determine the weather conditions that create a bumper crop or a supply shortage over the coming months.

The risk of a selloff in the corn market will rise with the price. However, any weather issues could have an explosive impact on prices. We are now at the most volatile time of the year for the corn and other agricultural commodity markets during the planting and growing seasons. Expect lots of volatility in corn, soybeans, and wheat prices over the coming weeks and months.

Meanwhile, exogenous factors include rising inflationary pressures as monetary and fiscal policies increase the money supply and debt levels. The US dollar is the pricing benchmark for commodities as it is the world’s reserve currency. A weak dollar tends to support raw material prices. The dollar index has traded in a range from $88.15 to 103.96 since 2014. At the 91.544 level at the end of last week, the dollar is a lot closer to the low than the high over the past seven years.

Keep an eye on the weather over the coming weeks and months. The forward curve in the corn market could shift as the new crop price is far below the nearby May futures. We may not have seen the last new high for corn in 2021 as the market continues to pop higher in a trend that began one year ago at $3.0025 per bushel.