What a ride the beginning of the year has been so far. As we warned in our year end and 2019 outlook, the equity markets were most likely set up for some bottom pickers to step in and show their support out of the gates. Show up, they certainly did, after an initial two-day drubbing, the DJIA ran up 747 points Friday, on the heels of a spectacular jobs number. The SP500 gained 84 closing up 3.4% at 2531.94. (WSJ) Also aiding the ascent was none other than FED head Powell with comments like “we would adjust the balance-sheet normalization policy if needed” and “the FED is listening carefully to the market.” He also noted the FED is prepared to adjust policy “quickly and flexibly.” Sounds a bit plunge protectionist to me, but hey equity investors certainly loved the news!

What had the markets so giddy? Non-Farm Payrolls rose 312k, greatly exceeding the 184k expected number. The revisions for the two prior months also added another 21k and 10k respectively to their already lofty numbers. All said, the last three months have averaged job gains of 254k. As the WSJ noted, the last time we saw large beats like this, the ensuing months saw payrolls plunge, but let’s see how February’s number goes, no need to spoil the moment.

As these numbers were taken with great reception by the equity investors, we must note that the yoy avg. hourly earnings jumped by 3.2%. For consumers this may be a good thing, but for businesses, this is an increase in labor costs, a most vital element when it comes to calculating one’s margin. If inputs begin to rise and labor costs rise, well then, we can see why companies like Apple are feeling the pinch, yea we know it’s a cult following, but when increasing prices just to keep margins up becomes impossible, well then you have contraction. So, for now we will keep a tight eye on this increase and look at all the other viable input inflation metrics to determine whether or not this is something more sustainable or just transitory.

On the other side of the investment aisle, in bond land that is, yields took this number to spike off of their new-found lows. The US govt. 10-year rose from 2.55% to 2.66%, yields on the 2-year spiked just as much, causing a nice flattening in the US yield curve. For those that read our 2019 Outlook, you would have seen our call for this part of the US yield curve to continue to tighten or flatten as the FED continues to put the pressure on to get the Fed Funds rate up to 2.75%. We suspect they will do so at their March meeting, despite political pressure out of DC. Once they do this, which we believe will be their final hike for most likely another decade, the US curve will be inverted via the Fed Funds/10-year, a most ominous sign for the economy and equities in general.

If the FED does indeed have the backbone to defy DC, we feel that the global equity markets will take this as a cue for risk off and global bond yields will continue to fall in anticipation of future rate cuts. We can see a little bit of global positioning going on considering this theme already as the US Dollar has lost some 1% over the last month. We aren’t sure how we feel about this cleanest dirty shirt thing, but we aren’t too sold that a large currency move is imminent. There is too much at stake right now to make that call, even if the FED does pause, we can’t determine what the ECB reaction might be. Furthermore, we have China and a potential Yuan devaluation considering the tariff war that is ongoing. We saw some year end buying in the Yen, but not sure if it long lasting or just out of year end needs. So, all in all we aren’t too convinced of a weaker dollar theme, we tend to think the FED will stay the course here in Q1 and that should buy the dollar some time.

Speaking of the dollar, perhaps a better gauge of its weakness is being exhibited within the metals complex as Gold has continued to rise. Gold hit $1300 on Jan 4th, but has fallen back off just a bit closing today near $1296. Our readers have seen our bullish call for the metal over the last quarter and we noted the resistance at $1294 initially, but now trading back above there, leaves open the potential for another run at new highs. Whether or not the CTA crowd has been convinced to join the foray is still in question, but the metals are outperforming. Silver has risen some 13% off its December low and traded up near $16.

Let’s get to a few technical charts. First up let’s look at the equity futures markets, here we have the SP500 and you can see the pre-Xmas low was followed by a nice 12% run: 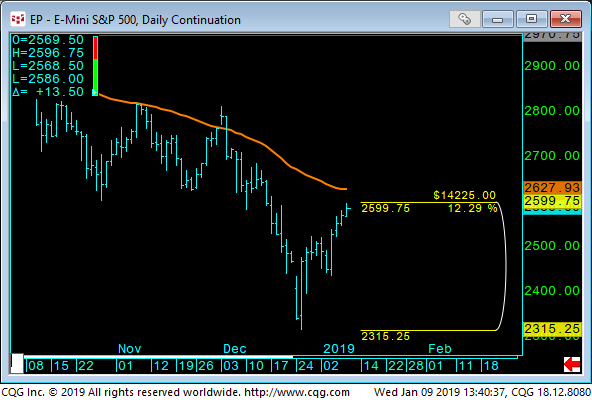 The Nasdaq futures have run some 14% off the lows but the 50 period Vwap beckons: 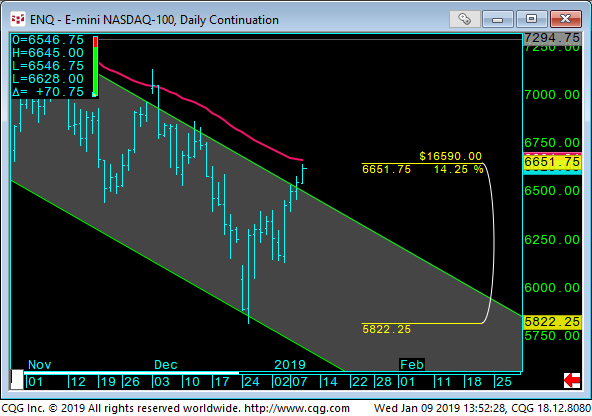 When we look at the coveted FAANGs vs the SP500 we can see how a nice double bottom formed and now the FAANGs out performance has run up past both prior Nov. and Dec. highs: 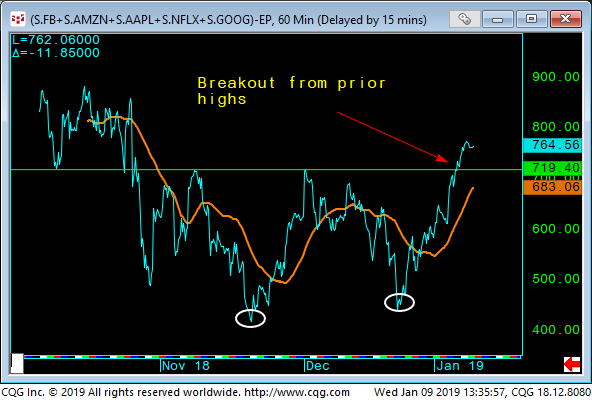 The Russel 2000 index futures were bolstered by the risk on trade as it has risen some 15% off of their late December lows: 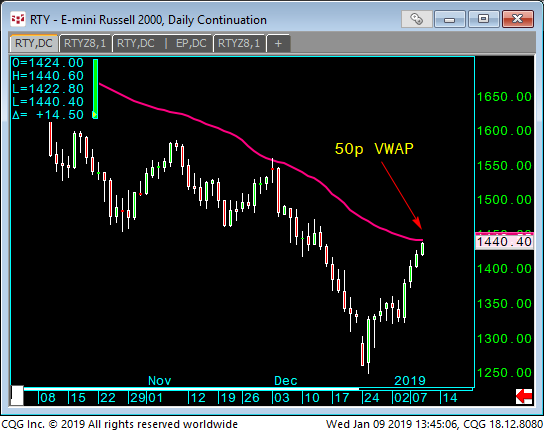 Let’s take a look at the bond market where the US gov’t 10-year yields fell toward new lows down at 2.54% but have since rebounded back above 2.70% as equities rallied: 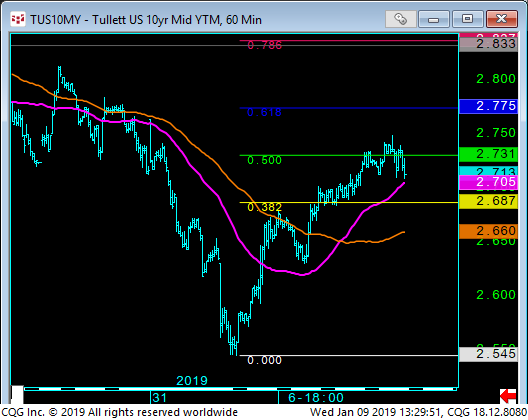 Here we can see that Crude Oil has also been the recipient of some fresh buying on the lows as the $42 level held and has since bounced some 24% up to $52: 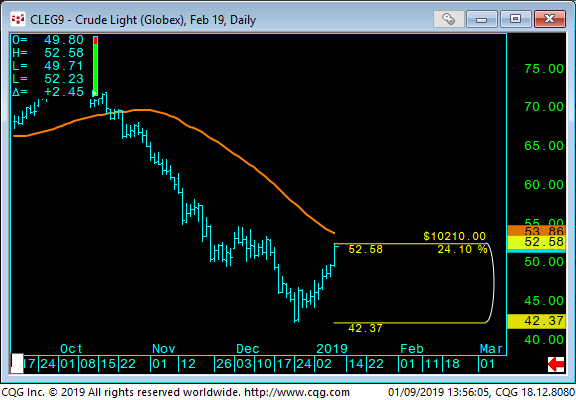 We also like the Gasoline contract or RBOB as a nice long base is being broken out of and above 1.37 is bullish as both Vwaps (50,200) are shown here above: 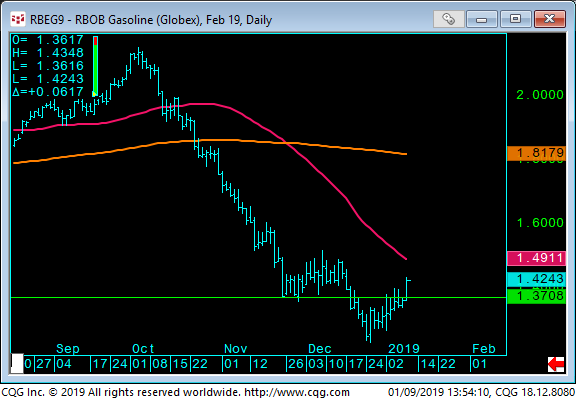 What else did we see out last week that is of note? GE shares rallied off of news that Apollo put in a $40bn bid for their aircraft-leasing unit. (Bloomberg) We mentioned in our prior update how GE was trading below great recession lows, in which we said, “who says you can’t go back in time!” Of course, GE put in a daily low of $6.66, it now trades $8.50 a nice bounce, but will it last?

Another company that we were critical of was back in the news, PG&E dropped another 30% on potential BK filing. (Reuters) Many of our readers will note we were critical of the company a few letters back as to their potential liability in the California wild fires. We caught some flack on social media outlets that our sources were unconfirmed when we spoke of this, but as you can see, they were not. We were vindicated as we make it a priority to verify all data that we present for viability and trustworthiness. Sometimes you have to think outside the box and we go to great lengths to uncover things so you don’t have to. PG&E was trading near $50 in November, its last print is $17.83!

We saw a great chart from PEW Research Center, displaying the obvious lack of purchasing power over the last 50 years. If it hasn’t become obvious by now that inflation has destroyed any semblance of actual wage growth when it comes to spending said wage. We hear many arguments about the fact that things were also cheaper back when, yea right, it’s all relative! This chart should put that false argument to rest. We don’t see actual growth in wages, do you? This is the problem when people falsely put data into nominal terms instead of chaining the data to make a constant comparison. It’s no wonder Keynes loved inflation, so few truly understand it! This deflation in wages is the reason why so many seemingly struggle to get ahead. That is, the things that truly matter, healthcare, housing, education all rise exponentially, while all the crap we don’t need, cell phones, Smart TV’s, Laptops always fall in price! Anyway, here is the chart: 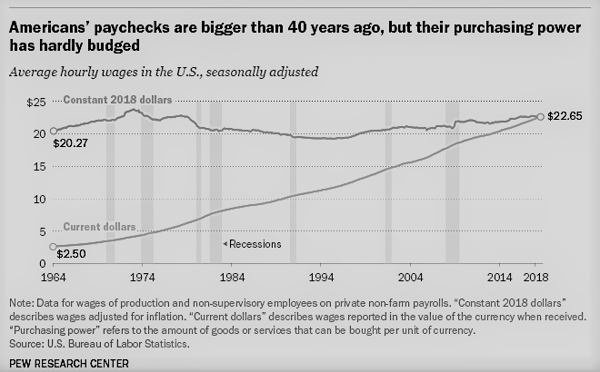 Finally, we have to mention the loss of one of businesses greatest innovators of corporate culture, none other than Herb Kelleher. Herb turned Southwest Airlines into a consistent profit center despite the immense struggles of industry participants in general. Herb took a no nonsense approach to low cost airline travel, simplifying it down to one single plane, the Boeing 737. This allowed Southwest to streamline maintenance and keep training and part’s cost down. His largest contribution was the culture, whereby he put the employee first. As we were lucky to cover him in business school, we found that there is extreme truth in the fact that, if your employees are happy, then they are more adept to pleasing the customer and it all goes toward generating a positive bottom line. He will be greatly missed, the Harley riding, bourbon drinking cultural corporate icon, who drove Southwest to 45 straight years of profit, his legacy will certainly live on. Cheers to everyone in this new year and thank you for reading.