Seasonal Indigestion In Stocks At The End of Q3

The fall months are my favorite. The cool weather is a welcome change from the hot and humid days of summer. There are few sights more pleasing than the turning of the leaves over the coming weeks as the change works its way from north to south as temperatures drop.

The stock market has more than a few bad memories during the fall season. The great crash of 1929 occurred in October, as did the 1987 plunge in share prices. In 2008, an October plunge was the most significant stock market decline during the global financial crisis.
Last week, we witnessed the first signs of fall indigestion in the stock market, which had risen to its most recent all-time high on September 2.

September 20th was a reminder

Last Monday, the stock market fell. After making a new record high on September 2, the S&P 500 had been making lower highs leading to the most substantial decline in months. 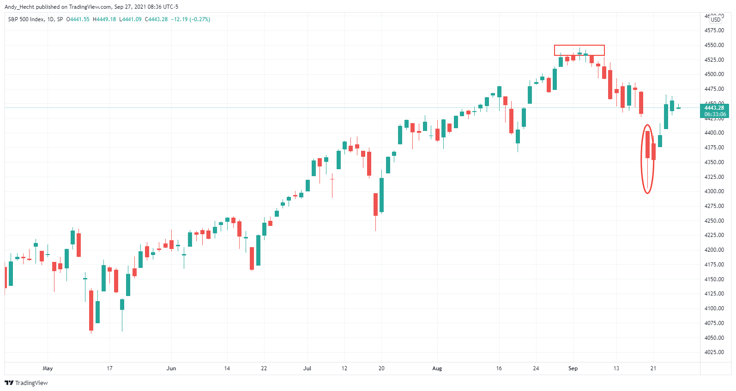 September 20 was a reminder that the potential for a substantial correction has increased with each new high in the S&P 500.

‘Tis the season to be cautious

The stock market always gets the jitters in the early fall. Memories of price carnage during October crashes are indelibly etched in trader’s and investor’s minds. For those that did not live through or forgot the 1987 and 2008 selloffs, the financial media reminds them of the danger at this time of the year. The media pundits know that provoking fear makes for great copy and increased viewership. After all, the media’s primary job is selling advertising. Fear makes more people tune in each day for longer to keep tabs on what is happening.

Meanwhile, it is the season to be cautious in the fall of 2021 because bullish and bearish factors are pulling the stock market in opposite directions. The long-term price trend remains bullish, and most investors are long stocks. However, rising interest rates and taxes are not bullish for stocks, and they are on the horizon.

The Fed remains accommodative- The debt is a compelling reason

Last week, we heard from the US central bank as the Federal Open Market Committee held its September meeting. The outcome was a non-event as the Fed kept the Fed Funds rate at zero percent and did not alter its quantitative easing debt security purchases at $120 billion per month. The decision was unanimous.

Meanwhile, the devil was in the details as the central bank told the market that it could begin tapering quantitative easing before the end of 2021. It also guided that a consensus of members believe liftoff from zero percent short-term rates would occur in late 2022, with three to four increases in the Fed Funds rate coming in 2023. The projections depend on inflation averaging over 2% for an “extended” period and a move towards full employment.
Chairman Powell put more meat on the bone at his press conference, making him sound more hawkish on monetary policy than the statement. He said QE tapering could begin as early as at the next meeting and could finish in mid-2022. If the Fed begins tapering in November at a rate of $15 billion per month, it will complete the process by July 2022. At that point, the central bank could consider increasing short-term rates.

Tapering is not tightening; it is just less monetary policy accommodation. Many issues over the coming months could stall a move towards setting the stage for tightening credit, which could weigh on stocks and other asset prices as bonds compete with other asset classes for investment capital.

Meanwhile, the US government is working to unleash an unprecedented $3.5 trillion budget package and another $1 trillion in infrastructure spending. The government also needs to increase the debt ceiling as it bumps up against the current $28.5 trillion level. At the end of last week, it stood above that level at the $28.8 trillion level. As the Fed moves slowly to tighten credit, the government’s fiscal policy will more than compensate, allowing targeted stimulus to flood the financial system. The Fed is between a rock and a hard place as increasing interest rates will cause the cost of servicing debt to rise substantially. Each twenty-five-basis point increase in the Fed Funds rate causes debt servicing costs to rise by an incredible $72 billion. The debt is a compelling reason for the Fed to remain highly accommodative. If Chairman Powell is unwilling to go along with the government’s spendthrift agenda, expect a replacement.

Chairman Powell’s hawkish tone at the latest press conference could turn out to be his swan song. Progressive Democrats have told President Biden they want him to replace the sitting Fed chief when his term expires in 2022. The left-wing of the President’s party wants a Fed Chair that follows climate change and equity initiatives. Any replacement will sing a far more dovish tune for monetary policy than the sitting Fed Chairman. A replacement would likely light another inflationary fuse, due to a far slower approach to tapering and increasing the Fed Funds rate.

Taxes are the problem

The bills are coming due for the global pandemic, and they are enormous. Meanwhile, the spending continues as climate change, and social initiatives are going to cost trillions. The administration has rolled out its plan to increase corporate taxes and taxes on the “wealthiest” Americans with incomes over $400,000 for individuals and $450,000 for married couples, along with bumping up capital gains rates, inheritance, and many other taxes. Meanwhile, the increases may not scratch the surface in paying for the spending, but it could throw a monkey wrench into markets. Higher corporate rates will cause prices to rise as corporations pass along the costs to consumers. Higher taxes will leave less capital for share buybacks, and earnings will likely decline from projected levels. The bottom line is that higher taxes are likely to weigh on stocks. Higher taxes and rising interest rates could create a potent bearish cocktail for the stock market over the coming weeks and months.

A correction is overdue, but that does not mean it is coming

All signs point to an ugly correction in the stock market. However, signals can be misleading. When the US elected Donald Trump as the 45th President, many analysts predicted the stock market would fall like a stone, but it exploded higher. Other analysts thought that putting Joe Biden in the Oval Office would mean a severe correction in the last election. Stocks continued to make new highs.

Higher taxes and rising interest rates are a prescription for lower stock prices, but they are not guaranteed. The Fed plans are to eliminate QE by mid-2022 and begin the liftoff from a zero percent Fed Funds rate late next year. However, there may be a new economist at the head of the central bank with a far more progressive agenda in 2022.

Meanwhile, the budget and tax increases need Congressional approval, which is not guaranteed. The bottom line is that moderate Democrats and Republicans are not in favor of adding trillions to the US debt and increasing taxes that will filter down to all consumers. There are lots of what ifs facing the stock market over the coming weeks and months, which could cause lots of volatility on the up and the downside.

Follow those trends; they are your only friends. Ignore the experts as no one has any idea about the future. Remember, the current level of the stock market is always the right level. More aggressive buying or selling will establish the path of least resistance of prices. Go with the flow!

There is seasonal indigestion at the end of Q3. The future is uncertain. Put aside the fear and embrace the trends. We will find out soon if the price action on September 20 was the start of a correction or a one-day wonder that will put the market on a course for even higher highs.