We never know what may inspire us to write on a given week. Usually we target some sort of fundamental or technical formation and then extrapolate that data as it portends to our trading and investing view point. This week however we are thinking about grocery stores.  Why?  We aren’t really sure but it seems as if this arena is growing quite frothy. We can't help but look around Chicagoland and see the plethora of brand new hypermarket grocery stores going up. We aren't even talking about the Walmart's, Costco's or Targets. We are talking about Mariano's, Whole Foods, Pete’s Fresh Market and even Aldi's.  Mariano's is taking grocery store shopping and trying to merge general merchandise with a high end feel.  Not sure the masses care too much if a piano is playing while they grab their bread, butter and eggs, but maybe the guy that is getting his steak cooked for him does. Hey we admire the attempt to bring some sort of elitist feel to the general grocery store masses. What we are thinking is that this is all being funded by cheap debt and easy access to capital. This seems like a perfect scenario to describe how this directly leads to a daisy chain of events down the path of over capacity and finally an economic downturn.

For example, let's call our new grocery store Company A:

Company A takes on debt to build out capacity and inventory

Construction management hires out all sub contractors, engineering, labor, and purchases all materials

Farmers and Ranchers start to increase production and raise assets, raising costs for feed, water and agricultural production as well as other supplies necessary to grow and deliver said products

Company A spread itself all around the country

A few years pass and margins begin to get squeezed by both competition and lack of productivity in the space. Higher food costs driven by commodity prices, which cannot be passed onto the consumer, (at least not in theory) but the way grocery stores and producers combat this is buy charging the same or little more for less product. For example that box of cereal for $3 was 16 oz now it's 12 oz.

Debt service costs become harder to bear as decreased store volume was combated via opening more stores, growing sales, but raising debt. All this growth led to expansions by the vendors, ranchers, farmers to build out to sustain future capacity and demand.

Now that demand is waning and stores are being shuddered, people are being laid off and the economy is tightening as consumer spending is dropping leading to a cascading effect to all other stores and businesses.

What's left is a whole lot of capacity and no one to utilize it. Rancher and Farmers who took on debt to expand operations now are facing heavy losses and potential foreclosure on property and assets. Workers and management staff have to find new work and or government assistance. Banks that lent the debt now face deferment, forbearance, write downs or even complete loss.

Now we didn't even go into the waste that goes into having this much capacity or this much product available to the masses. If someone can find us a study as to how much is wasted through spoilage, we would be very interested because that is the ultimate waste of resources. Our economy is built upon substructures like this and it is why we go through economic boom and bust cycles. The misallocation of resources via central bank policy is probably the single largest component to these boom bust cycles. By artificially manipulating the cost of capital, it allows for malinvestment to continue whereby it would be thwarted if true organic economic supply and demand inputs were actually met.

If one had to put skin in the game in order to determine an economic decision that decision would be thoroughly vetted and sound judgment would prevail. This doesn’t mean that an investment will always work out, but what it does mean, is that it was done so via sound fundamental purpose and most likely done with savings as opposed to debt. It means someone saw an opportunity and decided it was worth the risk.  If all information was true and all data considered was clean, then the decision to act is purely up to the individual.  As we stated, all investments do not work, even ones done with sound analysis and judgment.  However it is by far a better form of risk when one is doing so on through their own volition, rather than being forced into something because an entity has given no other outlet.

What we mean by no other outlet is that the central banks themselves have so distorted the debt monetary system that the only way forward is continued debt expansion which leads to continued concentration of wealth and a further divide between the mega and the masses.

Much like the grocery stores and big box retailers, hell just look at Amazon, eventually they force the masses to merely sacrifice vending choice, for convenience. Meaning the only place you will be able to buy is through them. There was a time where this country realized that competition was good for the consumer that time is no longer. It is the large, well fortified well connected that survive and it seems as if government and big biz are forever unified.

We would tend to think this is a recipe for socialism as money becomes so concentrated that within an existing economic system, it is divided into just two tiers, the rich and everyone else. This missing middle class leads to social unrest, civic and societal breakdown. We don't want to opine on the timing of such measure, but the writing is already on the wall. Take for instance the new terminal at LAX, designed for those that cannot be bothered with the commoner, nor those pesky TSA agents. The story can be found here. This is what the elite have now and it will get much worse in the future, hell we might as well charge $20 a day to drive on a specific highway, not that inconceivable is it?

This two tiered economy creates a society driven by wealth as all the rules become designed to keep their status quo. Yes, Wall Street and Washington are the network by which this construct functions and where your investing senses must be focused.

We read this week that just 10 companies have accounted for more than 50% of the S&Ps 2017 return, of which, the top 5 accounted for 28% of that return! Why hold anything else right? Diversification? Forget it, no such thing, all that matters is where the holders of equities are concentrating their investments. We can do away with the old "Don't follow the herd." That is supplemented with simply:

For those that are interested, these are the companies in that Top 10:

If you haven't noticed, that list covers just about everything everyone uses on a daily basis and that in a nut shell should be your investing thesis, right? Buffet even says invest in things you know…we suppose Starbucks should be on that list too…for who can live without their morning double shot!

Ok we figured we would take a break from the usually SP and Bond centric notes and considering the narrative hasn't changed there, stocks with a consistent bid, bonds with a steady wait and see June Fed mode, we would toss in these charts from Finviz.com instead. Speaking of Starbucks, we figured we should lead off with Coffee, seems the beat down continues. $130 seems to be the floor and pivot here so risk for a run up is high, but a close below $130 and look out:

This next chart seems quite constructive and after dropping some 42% from 2016 highs someone seems keen to step in here:

We also saw this chart, Live Cattle and we couldn't help but notice the recent bout of selling and after a run up of some 100% since Oct 16, seems a bit toppy:

As usual we leave you with our Weekly Settlements. Bitcoin was the big winner on the week as that train continues to roll, up 10% this week and 83% YTD. The DAX continues to outpace global equities as fast money has shifted there. Anyway we hope you enjoyed the letter and thank you for continuing this journey with us.  Cheers! 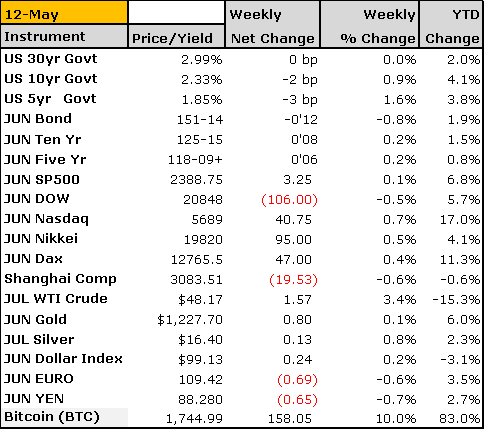 Finally, we will decidedly end our notes with our reaffirmation of the growing need for alternative strategies. We would like to think that our alternative view on markets is consistent with our preference for alternative risk and alpha driven strategies. Alternatives offer the investor a unique opportunity at non correlated returns and overall risk diversification. We believe combining traditional strategies with an alternative solution gives an investor a well-rounded approach to managing their long term portfolio.

With the growing concentration of risk involved in passive index funds, with newly created artificial intelligence led investing and overall market illiquidity in times of market stress, alternatives can offset some of these risks.

Futures trading is speculative and involves the potential loss of investment. Past results are not necessarily indicative of future results. Futures trading is not suitable for all investors. Nell Sloane, Capital Trading Group, LLLP is not affiliated with nor do they endorse, sponsor, or recommend any product or service advertised herein, unless otherwise specifically noted.