Don’t Get Too Comfortable With Lower Oil Prices

Crude oil is predictable, even though most market participants and pundits express shock when the price tanks as it has since November 26. The writing was on the wall in the crude oil market. The price of nearby NYMEX crude oil futures rose to the highest level since 2014 on October 25, when it reached $85.41 per barrel. Since then, crude oil has posted a loss over the past six consecutive weeks. 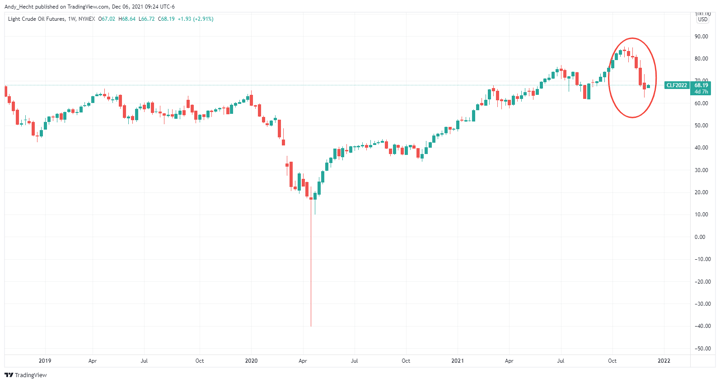 The weekly chart shows the correction that took the energy commodity to a low of $62.43 per barrel last week, a nearly 27% decline from the late October high.

Crude oil tends to take the stairs higher and an elevator shaft to the downside during corrections. In April 2020, that shaft had no bottom as the price dropped briefly to below negative $40 per barrel. Before April 2020, most market participants could never imagine an oil price below zero.

Meanwhile, the current correction is ugly for producers but welcome news for consumers. The US administration had been working to stem the rise of the energy commodity and is now taking a victory lap after the 27% decline. However, the celebratory political dance could be premature as all of the fundamental pieces of the oil puzzle continue to support much higher prices in 2022. Few markets are uglier than crude oil when the price moves to the downside. However, anyone who bought oil after the April 2020 plunge made a fortune and the current correction could offer the same rewards.

President Biden has been jawboning about higher energy prices over the past weeks. His administration released fifty million barrels from the strategic petroleum reserve in November to address rising gasoline prices. The President made a point of saying that rising energy prices are not related to his administration’s policies to address climate change by supporting alternative and renewable energy production and consumption while lowering supplies and the demand for fossil fuels.

Before the SPR release, the administration had twice asked the international oil cartel, OPEC+, to increase output, and OPEC+ denied the request. Last week, the cartel decided to proceed with scheduled production cut reductions of 400,000 barrels per day in January 2022. However, the rise of the new COVID-19 variant caused OPEC+ to leave the discussions open to trim output if it sees demand decline over the coming weeks. Moreover, any further decline in the oil price would likely cause a delay in the tapering, leading to lower production.

The SPR sale came right before hawkish comments from Fed Chairman Jerome Powell, who told Congress that he favors accelerating the pace of QE tapering to combat inflation. The Fed is now abandoning its characterization of rising inflation as “transitory,” as recent CPI data reveals more structural reasons for increasing prices. While the central bank, Treasury, and administration are taking inflation far more seriously, they have neglected to admit that it has been monetary and fiscal policies since early 2020 that lit the inflationary fuse. The tidal wave of liquidity and tsunami of stimulus and pandemic-inspired supply chain issues have created the current economic environment.

Meanwhile, the energy commodity is now moving into the winter months, a seasonally weak period for gasoline demand. Since late November, crude oil took an elevator shaft to the downside, which is partly a seasonal event.

The monthly chart shows the crude oil futures market experience late-year selloffs in 2018, 2015, 2014, and 2013. Going into the winter, selling in the oil market tends to be a seasonal event in the futures arena.

Meanwhile, US inventories have declined throughout 2021. 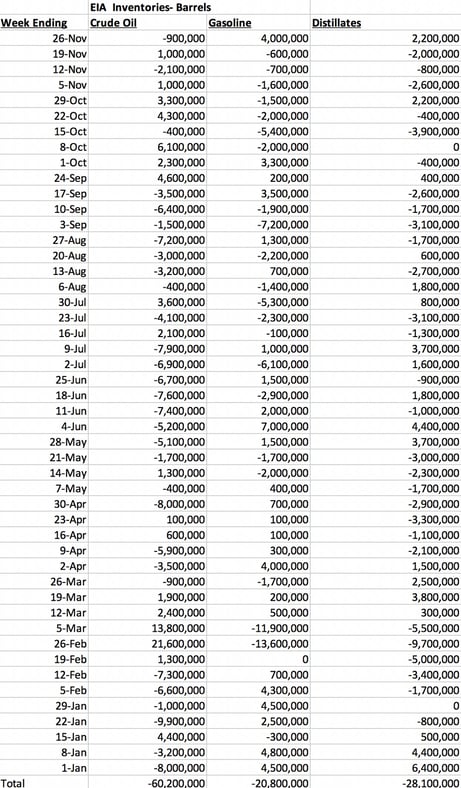 The chart shows that from January 1, 2021, through November 26, 2021, US crude oil inventories have declined by 60.2 million barrels. Gasoline stockpiles were down 20.8 million, and distillate stocks dropped 28.1 million barrels over the period. The inventory decline comes as US output is down from the March 2020 13.1 million barrel per day high. As of November 26, the US was producing 11.6 mbpd, 11.5% lower.

With US output lower, falling inventories are a sign of robust demand. The fundamental case for crude oil going into 2022 remains bullish.

OPEC+ is in control

It took decades for the US to establish energy independence from the Middle East. When daily output rose to 13.1 mbpd, it was higher than Russia and Saudi Arabia and was enough to meet most US demand.

President Biden pledged to address climate change during the 2020 election. On his first day in office, he canceled the Keystone XL pipeline that carried petroleum from the Canadian oil sands to Steele City, Nebraska, and beyond to the NYMEX delivery point in Cushing, Oklahoma.

In May 2021, the administration banned drilling and fracking for oil and natural gas on federal lands in Alaska. The administration is currently looking to shut down other pipelines they claim cause environmental damage. Regulations on fossil fuel production have tightened, increasing the production costs. There are no incentives and plenty of roadblocks for US energy companies to increase output under the Biden administration.
Addressing climate change is a noble cause. However, only around one percent of US automobiles are EVs, as gasoline-powered cars dominate the market. It will take decades to shift from hydrocarbons to renewable energy sources, but the US and the world continue to depend on fossil fuels for power.

The bottom line is the dramatic shift in US energy policy handed crude oil’s pricing power back to the international oil cartel. The decisions in Moscow and Riyadh will determine the path of least resistance of oil prices. The administration’s request to increase output was significant from two perspectives. First, it validated that the US returned the pricing power to the cartel. Second, it showed a lack of appreciation that climate change is a global issue. If the US is concerned that hydrocarbon production impacts the worldwide environment, why would it ask for increased output from the Middle East and Russia? The request seems inconsistent with the policy initiative.

OPEC+ would rather sell one crude oil barrel at $100 than two at $40. The cartel’s mission is to achieve the highest possible petroleum price for its members while balancing the market’s supply and demand fundamentals. After years of losing pricing power because of rising US output, OPEC+ is back in the driver’s seat.

Oil companies have told the administration if they are concerned with rising gasoline prices, asking OPEC+ for help is the wrong route. A more than cooperative group of US oil companies would love to help the administration temper prices by increasing production. Moreover, more output would create jobs and much-needed US tax revenue.

Leaving pricing policy in the hands of the cartel and Russian President Vladimir Putin is a prescription for higher prices over the coming years. Moreover, higher oil prices will fund expansionary desires for Russia as it eyes Ukraine and other former Soviet bloc countries.
Keeping oil prices under control depends on using the vast US reserves. The evolution of the green revolution is not an overnight undertaking. Over the coming decades, a slow and steady approach will allow technology to take the US and the world on a greener path. A kneejerk approach that transfers control of the oil market to the cartel is both an economic and political mistake.

The world’s most famous oil trader, Marc Rich, once said that oil is the blood that flows through the world’s veins. Replacing that blood with wind, solar, and other power sources to protect the environment is not a US, but a worldwide issue. Assuming that China and India will follow the US on the green road is naïve.

Inventory data shows that US demand is robust. The global population continues to grow by around twenty million each quarter. When I was born in 1959, under three billion people were on our planet.

As of the end of last week, over 7.8 billion people inhabited our planet. In 2024, the number will rise over the eight billion level. Energy demand increases each year; in 2021, it is higher than in 2020, and in 2022, it will be higher than in 2021. With the world still addicted to fossil fuels and OPEC+ in control, it is just a matter of time before oil’s price rises above the $100 per barrel again. Fundamentals favor the upside. Despite the recent correction, technical factors remain bullish.

The monthly chart highlights nearby NYMEX crude oil futures fell to a higher low last week at $62.43 per barrel, 69.0 cents above the August 2021 low. If the recent low holds, the energy commodity will have made a higher low. Even if crude oil probes below the August 2021 low, the trend since April 2020 remains bullish. On the upside, the late October high at $85.41 was the highest price since 2014, the last time crude oil traded above the $100 level.
Oil took the elevator to the downside over the past weeks during a seasonally weak time of the year. The only way to ensure that the energy commodity does not move back to triple digits over the coming months and years is to let US producers do what they do best, produce. Ramping up production and reestablishing US energy independence while the government and private sector work together on a renewable fuel transition is the only route for success over the coming decades. A logical plan with achievable economic and political goals has the best chances of leading the world down a greener path.

It is far too early for the leadership in Washington DC to take credit for the selloff in crude oil and gasoline futures markets. However, politicians will use every opportunity for a victory lap, even if the short-term gains lead to long-term losses.