What's with these high soybean prices?!


Soybean futures have been trending higher since reaching a low of $8.0825 per bushel in April 2020. The rally intensified when the price rose above the $9.50 level in late August. The move over the February 2018 high and critical technical resistance level at $10.71 in October set the oilseed futures on a path for beans in the teens for the first time since 2014.
After trading to a high of $14.60 on the May contract on March 8, May soybean futures pulled back below the $14 level to a low of $13.6425 on March 30. The very next day, the beans exploded in the most significant rally of this year. May futures moved over 90 cents higher from the March 30 low to the April 1 high before pulling back to the $14 level.

In any commodity, trading ranges tend to widen as the price appreciates. In soybeans, we are now going into the 2021 crop year as farmers will be planting the seeds that feed the world this month. Last week’s rally came as the US Department of Agriculture surprised traders with their planting forecast.

On March 31, the USDA reported that farmers plan to plant soybeans on 87.60 million acres. While the number was higher than the USDA’s 2020 intentions of 83.51 million, it was far lower than the average trade estimate of 89.996 million acres. The USDA also said that farmers would plant 91.144 million acres of corn, below the average trade estimate of 93.208 million. The report lit a bullish fuse under the soybean and corn futures markets, pushing corn to a new and higher high at $5.85 per bushel on April 1, the highest price since July 2013.

Meanwhile, the continuous soybean futures contract rose to a new marginal high of $14.5625. The last time the beans reached that level was in June 2014.

The buying runs out of steam- Backwardation in the beans

After reaching the most recent high, soybeans moved back to the $14 level at the end of last week. 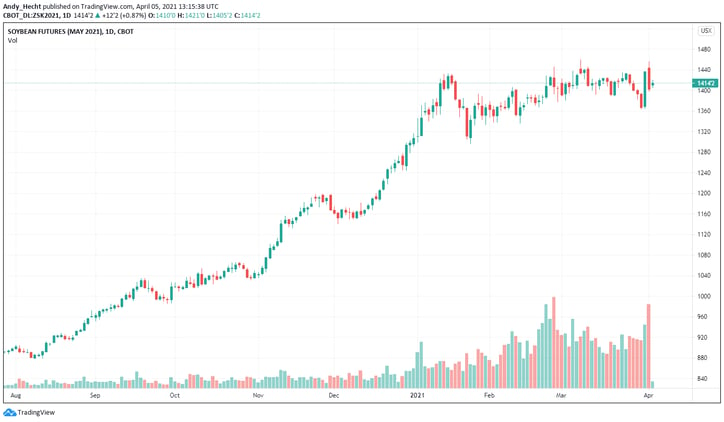 As the daily May futures chart highlights, beans rose to a new high on the highest volume of 2021 when over 410,000 contracts changed hands. The move had all the hallmarks of a short-term blow-off top in the bean futures arena. Farmers likely used the rally to do some hedging. Source: Barchart

May soybeans settled at $14.02 per bushel on April 1. The new-crop November contract settled $1.3825 lower at $12.6375. The backwardation or discount between beans for nearby delivery and for the new crop that is going into the ground reflects both nearby tightness and optimism that the 2021 crop will satisfy the ever-growing demand for the oilseeds, which could be a leap of faith.

The soybean price during the fall harvest will depend on the weather conditions across the US’s fertile plains. A drought or any other event that interferes with crop progress over the coming weeks and months could push prices far higher. In 2012, drought conditions moved nearby soybean futures to an all-time peak of $17.9475 per bushel.

Any weather problems that interfere with crop progress could potentially push beans out of the teens, on the upside for the first time.

Meanwhile, one of the critical factors for global soybean demand is China. The Chinese are rebuilding the hog population, which requires soybean meal, the primary ingredient in animal feed. Reports of another outbreak of African Swine Fever could weigh on the demand over the coming months. Meanwhile, if the Chinese turn out to be significant buyers, we could see a continuation of the rally that began one year ago, even if the US crop is robust.

Expect lots of two-way volatility in the bean market over the coming weeks and months as we enter the 2021 crop year. Price volatility can create a nightmare for producers and consumers looking to control costs. However, high levels of price variance are a paradise for nimble traders with their fingers on the pulse of markets.